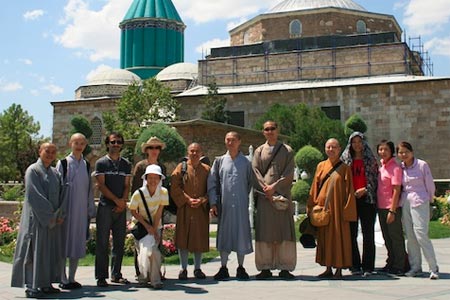 Buddhists and Muslims both came away with new appreciation of common virtues, shared human kinship, and mutual desire for peaceful societies in the world today. Please enjoy reading one of the reflective essays on the experience in Turkey from the Buddhist perspective:

Hence, there is no doubt that a person who is armoured with love needs no other weapon. Indeed, love is strong enough to stop a bullet or even a canon [sic] ball.

We all live in this world and we are passengers on the same ship. In this respect, there are many common points that can be discussed and shared with people from every segment of society.

M. Fethullah Gülen was born in 1941 in Korucuk near Erzurum, in Turkey. He is a devout Muslim and Sufi teacher. He is also an important contemporary thinker, educator and poet.

Since the 1960s, besides preaching about the Islamic faith, Gülen has also been actively campaigning on behalf of understanding and tolerance. Strongly opposed to violence, his work has been a conduit of social cohesion and harmony for many different people. Since 1970, Gülen has been very active and he often advocates intercultural dialogue ─ through dialogue and communication people can reach understanding and tolerance. He has long been working on the pursuit of social reforms and continuous moral education. His ideas are spread through teaching, writing, and interviews, as well as through meeting different people, especially religious figures and politicians. His ideas have a wide impact on people all over the world.

Gülen’s ideas have attracted many followers who regard him as a spiritual leader and teacher. His followers have implemented his thoughts to help others with different practices, which has developed into a social movement called the very vibrant Hizmet (Service) Movement or the Gülen Movement.

Gülen has inspired a worldwide network of members who came together to initiate the Gülen movement. All the members are voluntary and there has never been a leader or anyone in charge behind the scenes. This movement is based on the Islamic faith that also forms the backbone of the Gülen ideology. There are clear goals to do good altruistic deeds but there are no time limits, planning or targets. People can just work together because of shared values and they can contribute what they can best offer, and they can always withdraw from activities any time. The exact number of members of the Gülen Movement is not known but it is estimated that it varies from one million to eight million.

Although admired by millions of people, Gülen refuses to be the leader or the person in charge of any organization and he just wants to remain a spiritual teacher. He points out that the true essence of Islam, in addition to faith in Allah, is to cherish and spread to humanity goodness, kindness, forgiveness, honesty, generosity, the pursuit of inner peace and social harmony etc. And people should use “intercultural dialogues” to understand and accept each other’s social, ethnic and cultural differences, including differences of beliefs and practices. He advocates that people of different religions, from different countries and with different ideologies and cultures should use intercultural dialogues to seek consensus and mutual care. He believes that humans have more in common than differences, and that all should live in harmony and work together to pursue the ideals of mankind.

In 1980, Turkey experienced political instability. The military took over the government and implemented martial law. As more stringent laws were passed, Gülen resigned from preaching. After the parliamentary elections in 1983, martial law was phased out and Gülen could resume his work. Although he was later arrested, Gülen was soon released and he was able to continue and once again actively promote “intercultural dialogue to spread compassion, peace, and the use of gradual social reforms to facilitate social construction.

Since 1990, Gulen has met with Turkish Prime Ministers, members of Congress, various religious groups, including religious leaders like Pope John Paul II, some minority religious representatives, as well as other thinkers, teachers, businessmen and professionals. Gülen has also repeatedly talked about different religious, social, educational, political issues through media interviews to promote his ideas. Because of his far-reaching impact, Gülen was named the “great teacher (Khodjaefendi). As he promotes the doctrine of Sufi Benevolence and Fraternity, he is also known as the modern-day Rumi. Gülen’s books about Rumi and Sufism are used by some universities as textbooks on the research of world ideologies.

The day after 9/11, Gülen immediately issued an open letter to publicly condemn any kinds of terrorism for whatever motivations. He accused terrorism of undermining world peace and destroying the reputation of Muslims, and that they were completely in violation of the Islamic beliefs.

The Multidimensional Construction of a Spiritual Society

In 1994, Gülen helped set up the Journalists and Writers Foundation and served as the Honorary President, which was aimed at promoting “intercultural dialogue” for people from all walks of life. It further established a platform known as the Abant Platform (1998) to organize in-depth discussions on political and cultural issues. Almost every year thereafter they have different topics of discussion.

Gülen has written more than sixty books and hundreds of articles. There are thousands of recordings of his speeches, which are well received by millions of domestic and foreign readers. Some of Gülen’s books have become bestsellers and have been translated into English, French, Arabic, Russian, German, Spanish, and Urdu, Bosnian, Albanian, Marathi, Indonesian, Chinese, Japanese, and more.

Education is a very important aspect of the Gülen movement and Gülen’s followers have built many middle and primary schools and universities. There are about three hundred schools in Turkey and thousands more overseas, including in southeastern Turkey, Central Asia, parts of Africa, East Asia and Eastern Europe. These schools are funded by private companies, philanthropists and parents, and the educational mission is to promote Muslim love and peace as well as to encourage sincere dialogues and exchanges between people. In war-torn areas such as southeastern Turkey and Afghanistan, these schools provide precious opportunities for students to continue studying.

Click this link to see pictures of the trip to Turkey.