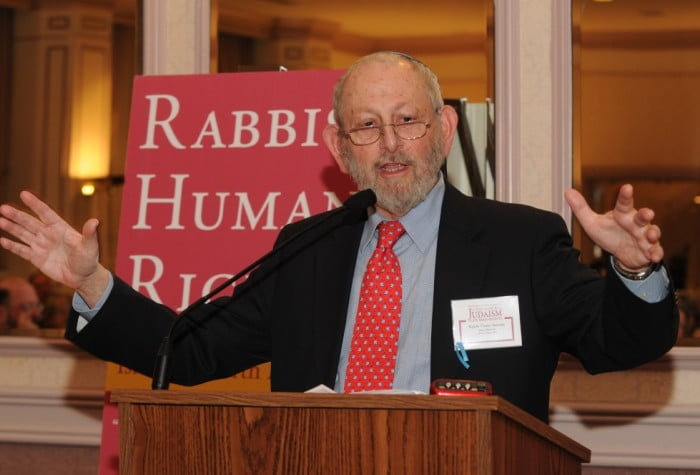 “Just using that expression ‘illegal immigrants’ is a form of oppressing the stranger,” a “very painful…inappropriate language biblically,” stated Rabbi Gerald Serotta at a Fairfax, Virginia, February 25 panel before about 50 listeners. Like him, “Welcoming the Stranger: Refugees and Immigrants in Our Midst,” a presentation of the controversial Islamic Gülen movement’s Rumi Forum, was uniformly uncritical towards current Middle Eastern refugee issues.

Serotta, an advisory board member of the leftwing rabbinical organization Truah, began the panel’s presentation of Jewish, Christian, and Muslim theological perspectives on immigrants and refugees. Love for the stranger “suffuses the Hebrew Bible” with 36 corresponding scriptural passages, he stated while repeating the talking point that “people are not illegal, they may be undocumented.” He noted Judaism’s forefathers like Abraham migrating in the Old Testament and concluded that the “reason why we are commanded to love the immigrant is because the immigrant is us. We have moved in history.”

Patricia S. Maloof, former United States Conference of Catholic Bishops Director of Refugee Programs, reinforced Serotta’s Old Testament teachings with references to the New Testament. Hebrews 13:2 admonition to welcome strangers recalled Abraham’s meeting with angels in Genesis while the Holy Family itself fled to Egypt when King Herod’s Slaughter of the Innocents threatened infant Jesus. His discussion of any charity shown to the “least of these” being like loving Himself taught that “by helping the stranger we are seeing Christ in the stranger,” she said.

Pakistani-American researcher Naseem Rizvi completed the discussion of immigration in the context of “three Abrahamic religions, Judaism, Christianity, and Islam” as “cousin religions.” Parallel to Moses and Jesus, Islam’s scriptures record the faith’s prophet Muhammad and his followers fleeing Mecca for Medina after an earlier group of about 80 Meccan Muslims had found refuge in Abyssinia’s Christian kingdom. “The Quran speaks of oppressed and weak people on Earth and suggests that they could migrate from their oppressed positions to another land of God,” she stated.

As Maloof herself once wrote in a 2003 book on Muslim refugees in the United States, “Muslim refugees share a fundamental understanding of hijra, or migration.” The “Islamic calendar begins, not at the time of the Prophet Muhammad’s birth or the first revelation from Allah, but at the time of hijra when he migrated from Mecca to Medina to escape persecution.” “In Islam, asylum is a right of anyone seeking protection,” she correspondingly claimed.

Yet the hijra understanding of Maloof and Rizvi misinterprets as a mere flight to freedom a migration remembered in Islamic orthodoxy precisely as the origin of an Islamic state that gave rise to a conquering civilization. As Indian-American Islamic commentator Dr. Ibrahim B. Syed notes, this “migration was a transitional line…from the position of weakness…to the position of strength” and exemplifies an understanding of migration serving Islam, not just individuals. While Rizvi’s presentation cited Quran 4:97’s reference to migration, Quran commentaries describes this verse as addressing “those who wronged themselves by residing with the non-Muslims” and “acquiesced to living under an un-Islamic order.” She also quoted Quran 9:6, but this verse appears in context of, and immediately after, the Quran’s Verse of the Sword (9:5) with its notorious command to “kill the polytheists wherever you find them.”

Such Islamic canons raise the specter of Muslims migrating in the name of furthering a supremacist faith in a process called “settlement” or “civilization jihad.” As Maloof wrote in 2003, the “word Muslim literally means ‘submitter'” and “[f]or many of its adherents, Islam is a total way of life.” Yet her writing simultaneously argued that “Islam emphasizes the equality of all people” completely overlooking Islamic law or sharia doctrines of non-Muslims as second-class dhimmis subjugated by jihad, a concept whitewashed by the book. Rizvi’s statement that “Islam embraces people of different races, nationalities, and ethnicities” likewise did not address this religious repression.

Contradicting Maloof, Musab Hayatli, an Arab analyst of refugee rights, notes that it is “difficult, if not impossible, for countries wishing to adopt a shari’a legal system to adopt the UDHR” or 1948 Universal Declaration of Human Rights. Given Quran 4:11, he writes that under sharia a “woman can expect to be provided for, while men expect to inherit twice as much as the woman.” Concerning “restitution of property to refugees, for example, this would raise questions, such as what the implications are for the many female-headed households.”

Such critical inquiry apparently makes no impression upon Serotta, whose comments attributed concerns about Islam and its adherents to the “Islamophobia” previously condemned by him. What he deemed an irrational fear demonstrated the “tremendous need to counteract that xenophobia that gets stirred up every so often in American culture.” In an erroneous equation, he stated that the “Syrian crisis evokes very painful memories for the Jewish community” of past anti-Semitic influenced international denials of refuge from Nazism. Yet his concern for Jews conflicted with his past slander of Israel as a malicious destroyer of Palestinian olive trees while heading Truah’s predecessor organization that he founded.

“Some are giving in to fear, some are very misinformed,” Maloof similarly stated when discussing American opposition to Syrian refugee resettlement, a process she questionably asserted would entail strict security safeguards. Yet the Middle East’s oil-rich Gulf States have refused to accept any Syrian refugees, citing precisely security concerns, a fact noted in an audience question, even though asylum in the region would be cheaper than abroad. Expressing her own embarrassment, Rizvi responded that Muslim-majority Middle East states “should be the prime states to welcome the refugees,” but “do not adhere to Quran as much as they should.” Yet Hayatli has written that, contrary to any individual asylum claim recognized by Islam, “there is no overtly stated obligation on the part of Islamic states, in shari’a at least, to provide asylum.”

Contrary to the naïve Islamophilia of Serotta and Maloof, Jews, Christians, and others wishing to exemplify Biblical precepts of welcoming strangers should temper humanitarianism with caution when approaching Islam. Unlike her fellow panelists, Rizvi actually cited no canonical references in Islam of Muslims welcoming strangers, but rather spoke of Muslims receiving refuge from non-Muslims, to the ultimate subordination of the latter. Even the Abyssinian episode cited by her denigrates Christianity, for in the Islamic account the ultimately not-so-Christian king professes an Islamic understanding of a Jesus who is not divine. As this indicates, a supremacist Islam claims to correct Judaism and Christianity’s corruption, notwithstanding Serotta’s previous claim that not just Christianity, but Islam as well, “are the daughter religions of Judaism.” As Europe is discovering, Muslim refugees might not just see themselves as supplicants, but also as religious missionaries waging various forms of nonviolent or even violent jihad.

Andrew E. Harrod is a freelance researcher and writer who holds a PhD from the Fletcher School of Law and Diplomacy and a JD from George Washington University Law School. He is admitted to the Virginia State Bar. He has published over 300 articles concerning various political and religious topics at the American Thinker, the Blaze, Daily Caller, FrontPage Magazine, Institute, Institute on Religion and Democracy, Investigative Project on Terrorism, Mercatornet, Philos Project, Religious Freedom Coalition, Washington Times, and World, among others. He is a fellow with the Lawfare Project, an organization combating the misuse of human rights law against Western societies. He can be followed on twitter @AEHarrod.