LAHORE: The Punjab University conferred an honorary doctorate upon Turkish scholar, writer and opinion leader Fethullah Gulen in a ceremony at the Undergraduate Study Centre on Thursday. Addressing the ceremony, PU Vice Chancellor Prof. Mujahid Kamran said that the last honorary degree awarded by the PU was to the Turkish president in 1986. He said that the Pakistani nation felt a kinship with the Turkish, who were leaders of the Muslim world intellectually and politically. He said that Gulen had made a deep and significant contribution to education.

Another version of the news:

Speaking on the occasion, PU VC Dr Mujahid Kamran said it was pleasurable to award an honorary degree to Fethullah Gulen who was world’s renowned scholar. He said PU was breaking with the tradition of awarding honorary degrees to political leadership. He said last honorary degree was awarded to the-then Turkish president in 1986 and now 26 years later we were awarding it to a Turkish scholar.

He said it indicated that our hearts throb with Turkish nation and Turkish people were general leaders of the Muslim world, intellectually and politically. He said in scientific research publications in Islamic world, Turkish stood number one. He said the contribution of Mr. Gulen towards the cause of education was deep, significant and worldwide.

The VC said Mr. Gulen had a message for the Muslims also particularly relevant to today’s Pakistan. He said message was that we were human being first and anything afterwards. He said that according to his message, we must deal with each other as human being with respect and passion and we must learn to resolve our differences peacefully and with tolerance. He urged the rulers to allocate at least four percent of GDP towards education and 1 per cent to research and development.

Provincial Minister Chaudhry Abdul Ghafoor congratulated the PU for conferment of PhD degree on Turkish scholar. He said we had the required potential to progress and Turkey was supporting us in various projects. He said Mr. Gulen had inspired young generation towards positive activities.

Zaeem Qadri said without balanced educational system, we could not eliminate social problems. 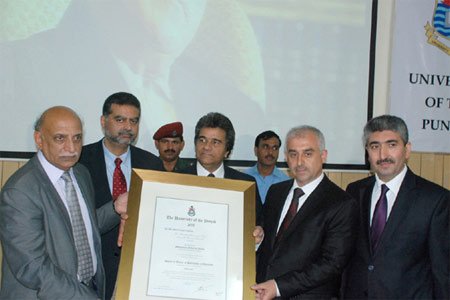 President Journalists and Writers Foundation Mustafa Yesili thanked Punjab government and Punjab University for precious gift of honorary PhD degree. The message from Mr. Gulen was read as he could not come to Pakistan because of illness.