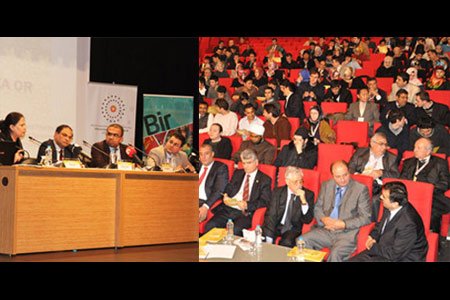 In this century when “Alienation” has become a global and local syndrome of every society and the problems of “inability to coexist” have gained momentum, The Journalists and Writers Foundation Inter Cultural Dialogue Platform (IDP) and the Fatih University Civilizations Research and Application Center (CRAC) co-organized the “Coexistence in Islamic Civilization and Contemporary Reviews” International Conference on 7 to 8 December 2012 in Istanbul.

The Final Declaration of the  International Conference on “Coexistence in Islamic Civilization and Contemporary Reviews” was presented to the public as follows:

1- Contrary to the misguided-perception in the world, Islam is a religion of peace, forgiveness and tolerance. Islam contains the essential ingredients including peace for living together. It is the responsibility of every Muslim to represent Islam in the best way possible especially in countries, which have a prejudiced perception against Islam. We believe that if relevant action is not taken, the prejudices and wrong conceptions of Islam will be rooted in such countries,

2- Focusing on differences among each other instead of common values increases prejudgment and hatred among people,

3- That the “best role model” for Muslims Prophet Muhammed (MPUH*) was not sent just for Muslims but as a “Mercy for All Mankind”, should be explained to the rest of the world through dialogue,

4- With the “Medina Vesika”* which was a first for its kind, the roots of living together were established for people with different religious, ethnic and ideological backgrounds,

6- Islam established itself with its own unique character in societies with different sociological, cultural backgrounds. It took civilization every where it was spread, Islam achieved this as a civilization on its own, and took civilization where ever it went.

7- Muslims take the Holy Quran, Sunnah and historical events as reference for guidance on how to live together with others,

8- Non-Muslims can’t be expected to learn Islam solely from books. Muslims have to reflect in their character what is written in the books,

9- The [Hizmet] Movement (aka Gulen movement) sees the entire world as a “place to serve humanity” and its efforts are for establishing tolerance and peace,

10- First and foremost that the “The Movement” and many other institutions and foundations around the world apply “The mentality of Living Together”. They have work in collaboration with each other and share their experiences in a new and dynamic spirit,

11- And With a paradigm appropriate for the modern ages, Mr.Fethullah Gulen has pointed out the importance of the “The dialogue person”. In that sense it is a need for every Muslim to be a “dialogue person”. We believe this is not a new concept, it is a fact derived from the practices of our Prophet Muhammed (MPUH).

We present for public consideration with respect.

Committee of the Final Declaration:

* MGPH May God’s Peace be upon Him

* Medina Vesika” An agreement made in Medina between peoples. It is also known as the “Constitution of Medina“.