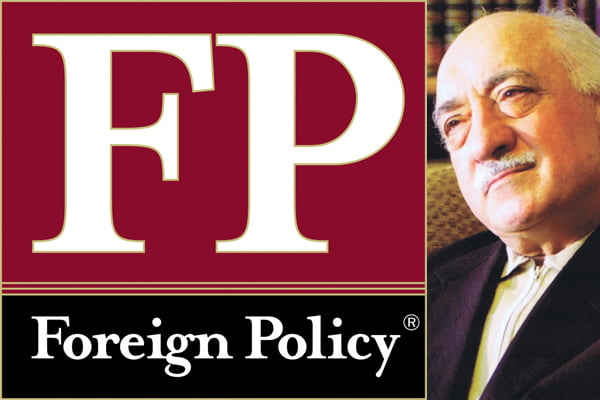 When Foreign Policy and Prospect magazine asked readers to vote for the world’s top public intellectual, one man won in a landslide: Islamic scholar Fethullah Gülen, an inspirational leader to millions of followers around the world and persona non grata to many in his native Turkey, where some consider him a threat to the country’s secular order. In a rare interview, Gülen speaks to FP about terrorism, political ambitions, and why his movement is so misunderstood.

When Foreign Policy and Prospect magazine asked readers to vote for the world’s top public intellectual, one man won in a landslide: Islamic scholar Fethullah Gülen, an inspirational leader to millions of followers around the world and persona non grata to many in his native Turkey, where some consider him a threat to the country’s secular order. In a rare interview, Gülen speaks to FP about terrorism, political ambitions, and why his movement is so misunderstood.

Foreign Policy: How do you feel about being named the worlds top public intellectual?

Fethullah Gulen: I have never imagined being or wished to be chosen as something important in the world. I have always tried to be a humble servant of God and a humble member of humanity. The Koran says that humanity has been created to recognize and worship God and, as a dimension of this worship, to improve the world in strict avoidance of corruption and bloodshed. It requires treating all things and beings with deep compassion. This is my philosophy, which obliges me to remain aloof from all worldly titles and ranks. However, I am not indifferent to the appreciation of kind people. [The voters were] extremely kind in naming me the worlds top public intellectual, a title to which I can never see myself as entitled.

FP: Do you harbor any political ambitions?

FG: I have never had, nor will I ever have, any [political] ambitions. The only thing on which I have always set my heart is being able to gain Gods good pleasure and, therefore, trying to make him known correctly and loved by humanity.

FP: Where does Islam fit in a Muslims political life?

FG: Islam as a religion focuses primarily on the immutable aspects of life and existence, whereas a political system concerns only social aspects of our worldly life. Islams basic principles of belief, worship, morality, and behavior are not affected by changing times. Islam does not propose a certain unchangeable form of government or attempt to shape it. Islam has never offered nor established a theocracy in its name. Instead, Islam establishes fundamental principles that orient a governments general character. So, politics can be a factor neither in shaping Islam nor directing Muslims acts and attitudes in Islams name.

FP: Why do you believe your movement is suspected by so many Turks?

FG: I do not believe so many Turks suspect my activities. The idea that this movement of volunteers is suspected by many Turks arises in the same way and for the same reasons that the world hears more about those Muslims whom the media call radicals. Since those who give this impression are extremely loud, some observers can be deceived.

FP: Hundreds of schools have been opened around the world based on a model you pioneered, blending science and religion. How centrally controlled are the schools run by the Glenist movement?

FG: My only role in the opening of the schools has been to suggest and encourage opening them. But it is impossible for there to be a [central authority] controlling the schools. They are in more than 100 countries, and there must be many different companies that have opened and run them. Some of them may have closer relations or interactions. Some may be sharing their experiences with others.

FP: What is the most misunderstood thing about the Glenist movement?

FG: I cannot accept concepts such as Glenism or Glenist. I was only a writer and an official preacher among people. I can have no direct influence on any person or activity. It is inconceivable that I can exert pressure on anybody.

But some people may regard my views well and show respect to me, and I hope they have not deceived themselves in doing so. Some people think that I am a leader of a movement. Some think that there is a central organization responsible for all the institutions they wrongly think affiliated with me. They ignore the zeal of many to serve humanity and to gain Gods good pleasure in doing so. They ignore peoples generosity. Such misunderstandings may lead others to have suspicions about the financial resources of the schools. A small minority in Turkey even accuses me of having political ambitions, when in fact I have been struggling with various illnesses for many years.

FP: You preach a moderate, tolerant Islam. What do you think causes terrorism?.

FG: Islam abhors and absolutely condemns terrorism and any terrorist activity. I have repeatedly declared that it is impossible for a true Muslim to be a terrorist, nor can a terrorist be regarded as a true Muslim. Terrorism is one of the cardinal sins that the Koran threatens with hellfire.

It is a fact that Muslims have lagged behind in science and technology for the last few centuries. The Muslim world suffers from internal divisions, antidemocratic practices, and the violation of fundamental human rights and freedoms. But Muslims have never been and never can be so base as to expect any solutions to their problems through terror.

[Terrorism] is formed of certain fundamental problems, [including] ignorance, poverty, and fear of others. Some people take advantage of the young and foolish. They are manipulated, abused, and even drugged to such an extent that they can be used as murderers on the pretext of some crazy ideals or goals.

To defeat terrorism, we must acknowledge that we are all human beings. It is not our choice to belong to a particular race or family. We should be freed from fear of the other and enjoy diversity within democracy. I believe that dialogue and education are the most effective means to surpass our differences.

FP: Would you like to return to Turkey someday?

FG: I certainly long for my country and my friends there. However, I have submitted myself to my fate and am willingly resigned to however it judges.