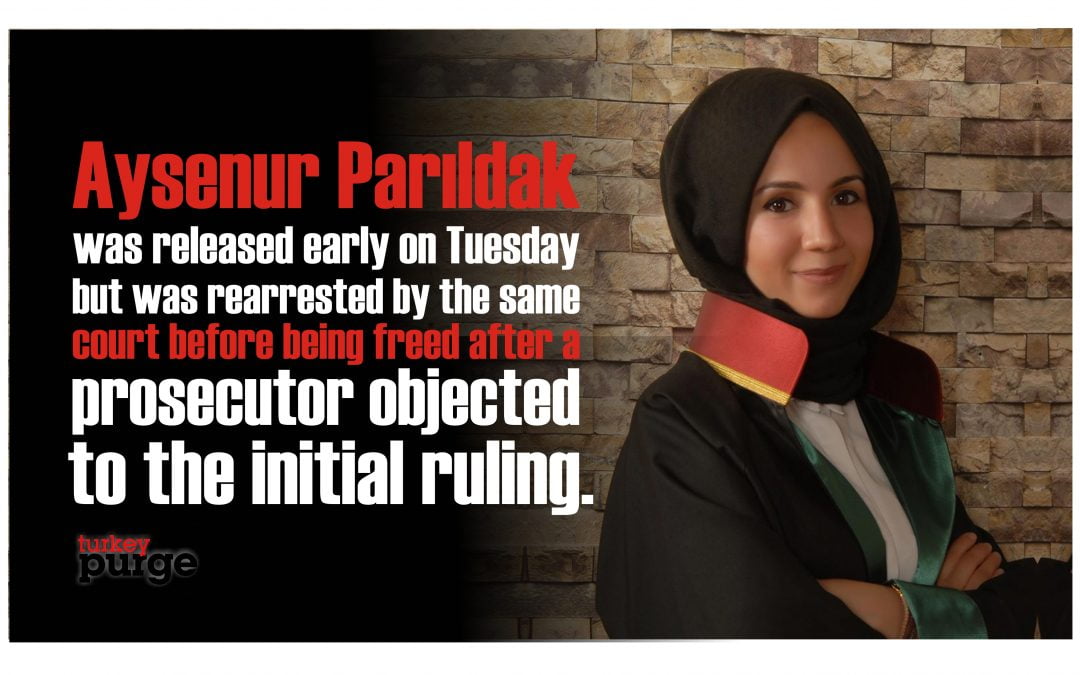 During a hearing at the Ankara 14th High Criminal Court on Tuesday, the court ruled to release Parıldak pending trial considering that all evidence against her has already been collected, that she would have no opportunity to tamper with said evidence, that a travel ban had been imposed on her and that she would go to a police station every week to check in.

While Parıldak and her family were awaiting her release, a prosecutor from the Ankara Public Prosecutor’s Office petitioned the court for her re-arrest, claiming that the Information Technologies and Communications Authority (BTK) was sending new evidence from her mobile phone.

The court then ruled for Parıldak’s rearrest before she was even released from the prison.

Parıldak was arrested on Aug. 11 after spending eight days in detention. She was covering court stories for the Zaman daily and also a student at the law faculty of Ankara University. She was planning to graduate this summer and continue her career as a lawyer because she was fired by the new administration of the paper, which was appointed by the government.

Sending a letter to the Cumhuriyet daily from prison, Parıldak said in October of last year: “I was subjected to violence and sexual abuse. I was interrogated day and night for eight days. They [police officers] were questioning me while they were under the influence of alcohol and were not avoiding saying this. Then the court process began, and here I am. I stayed here in a ward for one month. Then 20 people were taken out of wards and placed in cells, which is solitary confinement. … I am afraid of being forgotten here.”

Parıldak also reportedly said at the hearing that she had considered committing suicide several times during her incarceration.

In a similar case on April 1, the İstanbul 25th High Criminal Court had arrested again 21 out of 26 journalists who were accused of membership in the faith-based Gülen movement, which has been designated as a terrorist organization by the Turkish government and accused of orchestrating a failed coup last summer, despite the fact that the same court had ruled for their release a day earlier.

The journalists were accused of membership in “FETÖ,” a pejorative acronym that Turkey’s political Islamist government has used to smear the civic Gülen movement as a “terrorist organization.”

The indictment revealed that they are accused of membership in a terrorist organization due to their stories, critical tweets and retweets in the absence of evidence of any violent activity or the means to engage in violence.