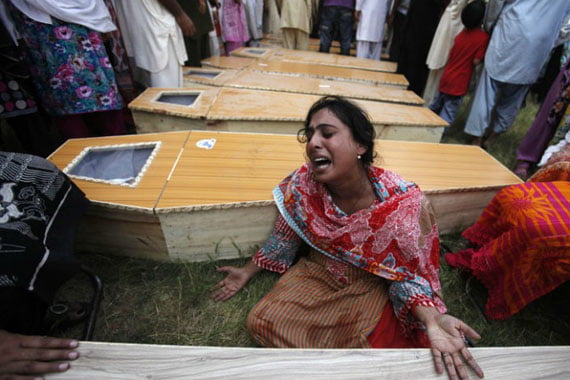 I am deeply saddened to learn about the bombing of a Christian church in Peshawar, Pakistan, which cost the lives 85 civilians and injured many others. I condemn this attack unequivocally and on this sad occasion reiterate my condemnation of all forms of terrorism regardless of perpetrators or their stated purposes.

Any form of attack, suppression or persecution of minorities is an act that contradicts the tradition of our Prophet upon whom be peace and blessings. Whether it is the senseless killings of innocent Christians in a Pakistan Church, the attacks on Coptic Christians in Egypt or the suppression of minority rights anywhere, Muslims should come out first in condemning these actions.

Every human being is created equal by God. Basic human rights, such as the right to life, to live in peace and to be treated with dignity, are sacred rights given by God. No suffering of Muslims can be used to justify inflicting suffering elsewhere on innocent civilians. In true Islamic thought ends never justify means.

I extend my heartfelt prayers to the injured, the families of the deceased and all of the people of Pakistan.

Fethullah Gulen is an Islamic scholar, preacher and social advocate, whose decades long commitment to interfaith tolerance and altruism has inspired millions in Turkey and around the world. Recently recognized by TIME magazine as one 100 most influential people in the world for “preaching a message of tolerance that has won him admirers around the world,”

Gulen has reinterpreted aspects of Islamic tradition to meet the needs of contemporary Muslims. He has dedicated his life to interfaith and intercultural dialogue, community service and providing access to education.

Alliance for Shared Values is a nonprofit organization that serves as a voice for civic organizations affiliated with the Hizmet social initiative in the U.S. The Alliance serves as a central source of information on Fethullah Gulen and Hizmet. For more information, please visit www.afsv.org