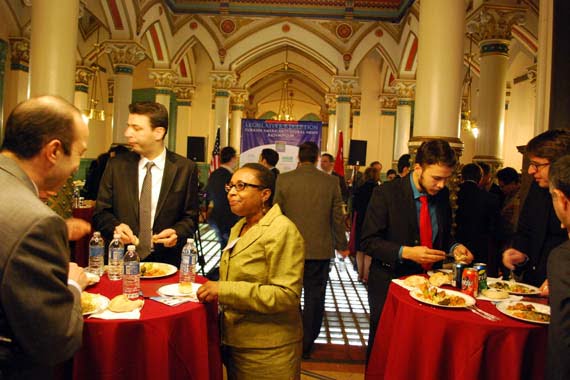 The American Turkish Friendship Association (ATFA) organized the now much exclaimed 4th Legislative Reception, in Richmond, Virginia on February 6th 2013. Members of Virginia’s General Assembly, their staff, and Turkish Americans attended the reception at the Old City Hall. The reception provided a great atmosphere for all attendees including legislators to relax and enjoy each other’s company; also provided a time for the district representatives and Turkish Americans to more-intimately convers with one another.

Turkish food, desert and coffee were served at the reception, along with an expedition on the Ottoman Sultans’ Fermans written down about the Ottoman subjects various religions. The various Fermans by the Sultan legalized the freedom to practice different religions throughout Ottoman lands.

SEZAİ KALAYCI, LOS ANGELES The four-day Anatolian Cultures and Food Festival, the largest Turkish festival in the world, is introducing Americans to Turkey and Anatolian civilizations while promoting Turkey’s diverse cultural communities on its third day. The festival, held at the Orange County Fair & Event Center, will end on Sunday. Preparations for the fourth […]