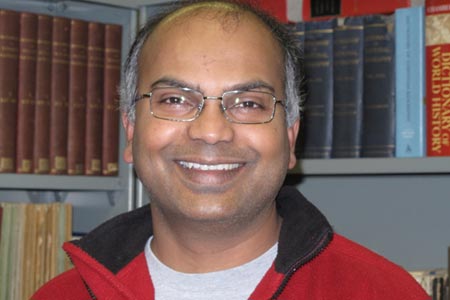 Dr. Marcia Hermansen, the Director of the Islamic World Studies Program and a Professor in the Theology Department at the Jesuit Loyola University Chicago, presented a lecture on Hizmet Movement (here after HM) at Indialogue Foundation, New Delhi on 7 March 2012. Dr. Hermansen teaches courses in Islamic Studies and the academic study of religion.

In the course of her research and language training she lived for extended periods in Egypt, Jordan, India, Iran, Turkey and Pakistan. Her personal contact with the followers of HM made her lecture personally attractive. I am grateful to Ali Akkiz and Ahmet for inviting me to this program. I was also given the happy opportunity to moderate the session which was enriching.

In this short article, I will spell out what I have learnt about HM and its founder. Hizmet Movement (aka Gulen movement) is a global movement that is inspired by the Turkish Muslim thinker and activist Fethullah Gülen. He stresses that ignorance, poverty, and conflict are the three greatest enemies of humanity. He encourages his fellow citizens to root out these evils from the human family. The followers of Gülen in the HM through education and dialogue tackle these vices and work for a more humane society.

What impresses me most about Mr Gülen is that he is a moral exemplar. His words and deeds inspire followers towards action for the transformation of society through service to the less privileged. He motivates his followers to make sacrifices in their personal lives in order to serve others. This is seen from the fact that his followers volunteer to go to different parts of the globe, even leaving their families, to serve those who are in need. There is no discrimination at the schools and other centers established by HM. Moreover, the business men who finance these projects around the world do not just give from their excess but generously with a deep concern for the other. It could be said that their service is qualified by their commitment to the other. As a Christian I cannot but notice the sacrificial content of such service that is also very much part of the Catholic Church’s devotion to humanity, which becomes truly holy when it is rooted in the personal element of sacrifice.

As a religious thinker Gülen does not confine himself only to religious issues but he also touches upon social, economic, educational issues. Thus he has developed a comprehensive vision of the world and persons in the world. Such an integral vision is operationalized only when we are involved at a personal level in terms of volunteering to working for others. His methodology is impressive.

One needs to appreciate Gülen’s discernment in his work. When he began as a religious preacher he began to influence the minds of many young students and professors at the universities. Soon there were suggestions that he should establish more mosques for worship. However, his keen analysis showed that his people needed more schools rather than mosques. This art of discernment is the fruit of a deep commitment to his faith and to his people. So he established schools and dormitories. Here was a novel idea that provided students with a caring place, when they were away from home. These dormitories were truly a home away from home! They provided women students with a safe place to stay during their education. They gave many women an opportunity to pursue a university education. In this way they promoted women’s education in a big way. This dormitory setup also helped students learn to live with one another, appreciating their many differences. Thus these student dorms’ were the seed-beds for HM’s dialogical mission. In the words of Dr Hermansen, Hizmet is rooted in the culture of dialogue.

Gülen’s vision is truly global. The volunteers of HM live and work in 154 countries! They plan to expand their operation to places where they have not yet reached. It is said that in the early years of his work Gülen placed a map of Turkey on his office wall and later changed it to a world map and finally replaced the world map with a picture of the globe from space. This photograph symbolically represents his openness to the whole world and emphasizes his passion to be at the service of the human family without any discrimination. Gülen’s global vision challenges his followers to lose themselves in the collectivity of humanity. This vision prepares them for a truly international world view.

The idea of networking is fascinating in the life and work of the followers of HM. There are a lot of people doing good work. But often they remain isolated without bringing much desired fruit. How does one transform a good work into an outstanding work? Without hesitation one could say, by net working! The followers of HM are great net-workers. Net working produces synergy. It is said that one plus one in mathematics is two; but, in human relations, it could be two, four or more, it could also be zero. The answer depends upon the quality of relationships. It appears to me that the followers of Gülen provide an opportunity to multiply the impact of their service by great networking. They are good at identifying their talents and at shaping them for a quality service.

Let us broaden out these reflections from the HM. Prof Tom Michel once wrote: “Many people see the need for interreligious and intercultural dialogue but are not sure where to begin. I have often been asked, ‘How do you go about starting up dialogue with others?’ Especially because I am a Christian who has lived and shared life with Muslims for many years, they ask, ‘How do you go about beginning a dialogue with Muslims? Where do you start?’ I believe that the first thing we have to do is to look around at the society in which we live to try to identify those who are our logical partners in dialogue. Who are the individuals and groups with whom we find ourselves sharing ideals, whose vision of the future is at least compatible with our own, whose value system intersects with ours at various points? Thus, for the Christian who wants to enter into dialogue with Muslims, the first step is to distinguish and recognize the movements, organizations and communities of Muslims who are open to dialogue with us, who have something to say to us from which we might learn something, and who are also ready to listen to us, to hear our stories, and to appreciate our religious and humane vision of life, even as they remain committed to their own spiritual path”. The followers of HM are one such group of people among many others whose vision is inclusive and consequently inspiring. I find them as my co-pilgrims in my dialogical journey.