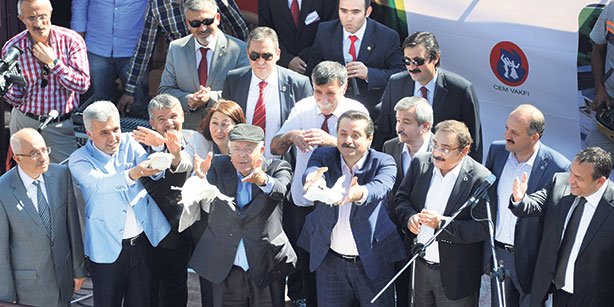 Labor Minister Faruk Çelik and the head of the CEM Foundation İzzettin Doğan are seen during the Groundbreaking ceremony of mosque-cemevi project.(Photo: Cihan)

The mosque-cemevi project’s groundbreaking ceremony was held in Ankara with the participation of Labor and Social Security Minister Faruk Çelik, a number of AK Party deputies and Alevi Cem Foundation President İzzettin Doğan and has been in construction since September of last year. The project, which is being carried out by the Cem Foundation and the Hacı Bektaş Veli Culture, Education, Health and Research Foundation, was first suggested by Fethullah Gülen, a Turkish Islamic scholar whose ideas inspired the Gülen movement, a faith-based civil society initiative. Speaking to the press following the ceremony, Doğan said that when Gülen first suggested the idea of a joint mosque and cemevi, his group welcomed the idea, adding that the project is financed by businesspeople from both the Alevi and Sunni communities.

However, according to a report in the Sözcü daily on May 12, the AK Party-led Mamak Municipality refused to issue a certificate of occupancy for the project on the grounds that it was financed by “parallel funds,” referring to businesspeople supportive of the Gülen movement, which is often denigrated by the government as a “parallel structure.”

The daily also said that another reason for the municipality not to issue the certificate of occupancy was that the mosque within the complex has not been constructed in compliance with the architectural plan approved by the municipality. Speaking to Sözcü, Mamak Municipality Vice Mayor Erdoğan Karadağ said the minaret that was built at the rear of the mosque on the right-hand side is not allowed, according to the architectural plan. “A tower should have been built instead of a minaret. That is why we did not issue the certificate of occupancy. The minaret is now being destroyed,” Karadağ said.

A certificate of occupancy is a document granted by a municipality to verify a building’s compliance with architectural plans and other laws, and confirming that the project is in suitable condition for occupancy.

The project, which is the first of its kind in modern Turkish history, was expected to be completed within one year and opened during Muharram, a month considered holy by Alevis, according to the Islamic lunar calendar. The complex was planned to include a conference hall for 350 people, a reading hall for children from disadvantaged families, lounges and guest rooms in addition to a soup kitchen which would be able to accommodate 350 people. There would also be rooms allocated for imams and Alevi religious leaders, called “dedes” and “zakirs,” to rest in. Both Sunnis and Alevis would be able to receive funeral services, including the washing of the deceased in accordance with Islamic rules. It would also have a mortuary serving both Alevis and Sunnis.

Tensions between the Alevi and Sunni communities in Turkey date back to Ottoman times. In 1511, the Ottoman army brutally suppressed a revolt by the Kızılbaş Turkmens of the Alevi faith on Anatolian soil and as many as 40,000 were killed. The Battle of Çaldıran, fought between the Ottoman Empire under Yavuz Sultan Selim and the Safavid Shah Ismail in 1514, resulted in the sultan issuing an edict to kill all the Kızılbaş in the region. During the Turkish republican era, hundreds of Alevis were killed in pogroms, which many now believe were masterminded by groups inside the state, in the cities of Çorum, Yozgat and Kahramanmaraş in the 1970s. Thirty-four Alevi intellectuals were burned to death in 1992 inside the Madımak Hotel in Sivas. In other incidents, such as in İstanbul’s predominantly Alevi Gazi neighborhood in 1995, Alevis were targeted by individuals armed with machine guns.

Gülen is a Turkish Islamic scholar known for his efforts to mend relations between Alevis and Sunnis while promoting interfaith understanding and tolerance. He has pioneered educational activities in a number of countries, along with efforts to promote intercultural and interfaith activities around the world.