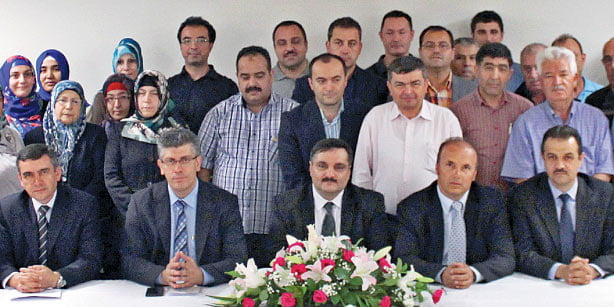 Turkey’s Prime Minister Recep Tayyip Erdoğan’s hateful and insulting rhetoric against Turkish Islamic scholar Fethullah Gülen and his followers is deeply wounding the Turkish community in Australia, said the Australian Universal Federation of Education & Culture (AUF) in a press conference on Wednesday in Sydney.
Erhan Bozkurt, a director at AUF, spoke at the press conference, which representatives from the federation’s 38 NGOs, which have been operating all over Australia for 25 years, attended. The Turkish community in Australia, Bozkurt said, was deeply wounded by Prime Minister Recep Tayyip Erdoğan’s insulting language toward both Gülen and the members of his movement, stating that no other religious scholar has been targeted by this many acts of defamation in recent history.

“Since Dec. 17, the Prime Minister Erdoğan has been targeting Gülen and his followers. He has called us mafia, evil, assassins, traitors, viruses and much more. We do not accept these accusations. We question whether these insults serve to hide the corruption investigations,” Bozkurt said at the press conference.

Gülen’s written works, Bozkurt noted, have been translated into more than 20 languages and universities in various countries around the world have established professorial chairs in his name, one of which is in Melbourne, Australia. “Erdoğan’s insults against Gülen only intensify our loyalty to him,” Bozkurt added.

AUF-member NGOs said that their organizations have achieved what the Turkish Republic could not in bringing together Australia’s Turkish diaspora and protect them from social evils, like alcohol, drugs and prostitution.

“The Turkish diaspora started arriving to Australia at the beginning of the 1970s. We have had lots of spiritual problems here. Almost all the Turkish families here had a member who was a victim of drugs. When our diaspora community’s needs were not addressed by the Turkish Republic, Gülen came to this land in 1992 and opened up several institutions here. We met him, enjoyed our conversations with him, and took him as an example. We still take advantage of his publications up to this day. His knowledge and spirituality lights our path. Thanks to the schools and institutions that were opened up under his guidance, our younger generations did not fall victim to alcohol, drugs and prostitution. Instead, they became prominent figures who are well respected in Australian society,” Bozkurt said.

AUF also said that its NGOs were disappointed to hear that Erdoğan had called for Turkish schools abroad to be closed. The Australian government would have resigned if similar corruption probes had taken place in the country, AUF said.