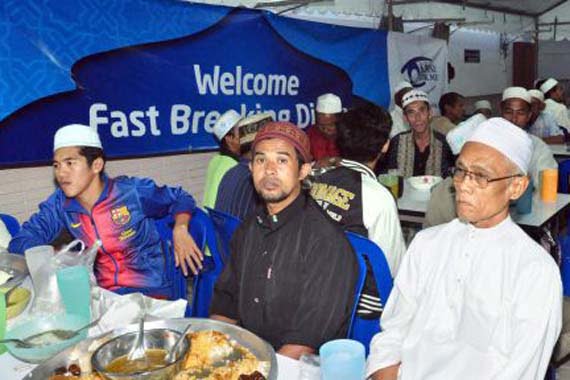 Kimse Yok Mu Foundation (KYM), which extends its helping hands to all over the world, held yet another iftar dinner for Muslims in Thailand.

In Thailand, Ramadan month is observed in a different way than in Turkey. Families prefer breaking the fast at iftar tables set around mosques rather than doing it at home. What is remarkable about these community iftar dinners is that all participants are collaborating here to help the volunteer staff in charge of setting iftar dinners. Praying and reciting salawat as they wait for the time, Thais break their fast with the water and date served to the tables. Next, they pray salat al-magrib (evening prayer) and then sit at the tables back for iftar.

As a part of its Ramadan agenda, KYM Foundation is organizing aid trips to Far Eastern countries. One of the KYM coordinators visiting Thailand, Ibrahim Serafettin Ekiz, reported that thousands have been hosted at iftar dinners for five days in Bangkok and Muslim-populated southern cities. Ekiz noted mostly the poor showed up for the dinners yet there were rich ones among who would like to share the abundance of Ramadan. Noting that KYM Ramadan iftar dinners in Thailand have become a tradition now, Ekiz said it’s amazing to see the joy over there.

The Muslim population of nearly eight million in Thailand break the fast together at community iftar dinners. Over four thousands of mosques are available in the country.

Since the attempted coup of July 15, 2016 the Government of Turkey has engaged in illegal extraterritorial and extrajudicial actions been taking strict measures to silence dissidents in other countries from various ideologies recently. Participants of Gulen Movement -known also as Hizmet Movement- have been the main target of this global witch-hunt and abductions.