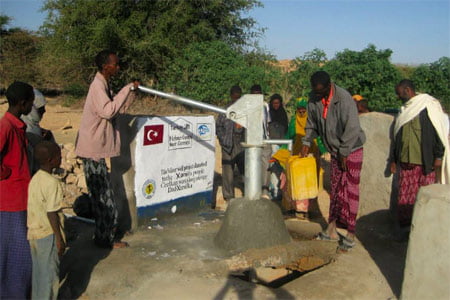 Numerous Turkish aid foundations are working to resolve Africa’s long-standing water supply problem by digging wells in various countries across the continent, with over 1,500 sunk so far. Africa suffers from a lack of drinking water due to drought, which is common across the continent. Research being conducted into the issue shows that 4,900 children die every day in Africa due to a lack of drinking water or diseases caused by drinking contaminated water.

Carrying out frequent aid campaigns in African countries in need, Turkish aid organizations are addressing the water problem on the continent and have dug over 1,500 water wells in Africa to provide clean water.

Turkish humanitarian aid organization Kimse Yok Mu (Is Anybody There) has constructed about 200 wells in Somalia, a country struggling to cope with a worsening humanitarian crisis caused by drought. The number of people who die from diseases caused by contaminated drinking water and unsanitary living conditions is very high in Somalia. A coordinator for Kimse Yok Mu, Yusuf Yıldırım, told Today’s Zaman that they are trying to find a permanent solution to the water problem in Africa by sinking wells, adding that they are also trying to create more livable conditions for the people of Somalia.

“Before the construction of the wells, the Somali people used to carry water from areas that were a long way away from the places in which they were residing. Now they have this water without making as much effort, and also this water is clean compared to the water they used to collect. By doing this, our aid organization provides them with clean water and prevents deaths stemming from dirty water to some degree,” Yıldırım noted.

Kimse Yok Mu, set to reach out to 103 countries around the world as a part of its Ramadan agenda, distributed $10.000 worth of aid to the needy and orphans in Kosovo still bearing the traces of the Ottoman. The iftar dinner hosted by the Kosovans who embraced the KYM Samsun volunteers reinforced the friendship in between, on the other hand.

Turkish investors have set their sights on the Kenyan education sector following the success story of a chain of schools in Nairobi and Mombasa. The businessmen now plan to establish one more school in Kisumu and a private university.