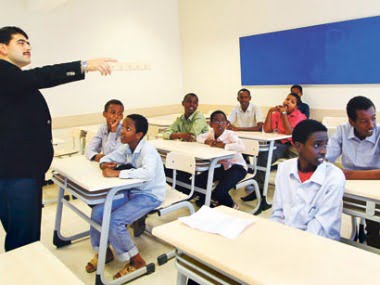 Youth in the Somali capital of Mogadishu formed long lines in front of schools this week as they competed for a slot in a rapidly expanding student exchange program sponsored by the Turkish relief organization Kimse Yok Mu. The organization is planning to provide scholarships for 350 new students from the famine-stricken nation.

Bilal Çelik, Somalia representative for Kimse Yok Mu, explained in an interview with the Anatolia news agency that word of the program’s expansion has garnered an overwhelming response in the capital, with a total of 10,000 students attending exams over the 10-day testing period. Faced with such unprecedented numbers, the representative says the organization is considering as many factors as possible during the selection process. “We are giving priority to children living in tents and orphans,” he said.

Çelik notes that students are hopeful of gaining an education abroad, saying, “After seeing a good education in Turkey, these youths’ biggest goal is to return to their country and help their people as doctors, engineers or as experts in other fields.” The program aims to place the 350 new students in Turkish universities and prep schools within the next month.

The student exchange program is just one part of a massive aid campaign undertaken by Turkey in response to East Africa’s worst drought in 60 years. Turkey’s relief efforts so far have included donating TL 500 million in aid to Somalia and distributing food to 12 million people in Somalia, Kenya, Ethiopia and Djibouti. The UN’s refugee agency recently declared that the east African drought is currently the “worst humanitarian disaster” in the world, and has urged other international actors to pledge additional assistance.

In addition to the 350 students which it plans to support in the coming months, Kimse Yok Mu presently provides education for 400 high school and 100 university students from Somalia.