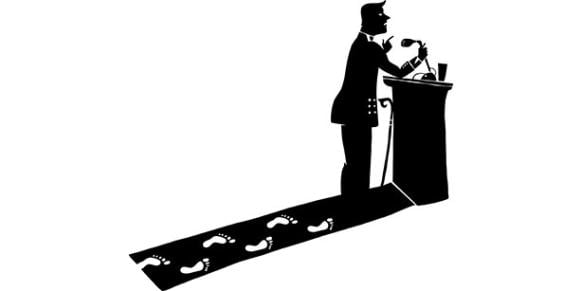 “A tick can spring and attach itself to you in the fields, forest or footpath without you knowing. It will start to suck your blood. Woe to anyone who attempts to remove it… Apparently, a tick has attached itself to the Turkish Republic. We first noticed that tick on Feb. 7, 2012, through the plot against Turkey’s national intelligence services. We were able to understand the scale of the devastation caused by this tick with the Dec. 17 and 25 coup attempts. The name of this tick: parallel organization. Another name for it: gang of Pennsylvania. Now there is a surgical attempt to remove this tick, which has nested primarily within the police, the judiciary and other state organs and is sucking the blood of the Turkish state and the Turkish people. We will keep the public informed of all developments of this operation until this tick is killed.”

“Actually, there is no need for further evidence; the crime and perpetrator are as clear as day. Their brazen poses despite this fact is enough to drive anyone crazy. What stories, what theatrical shows, what sob stories [in reference to images and footage showing officers held in detention]. These ‘privacy rapists’ present themselves as freedom and anti-corruption heroes. Forget that what you eat is forbidden, the breath you take is forbidden considering that you have raped the privacy of hundreds of thousands of people through your eyes, your ears and the material you’ve gathered.”

“We get rid of these people. From now on, not even a single member of this parallel group [in reference to Hizmet] will be able to stay here. It is not possible for them to remain here, to live here and to work here. I am a man of my word and will fulfill my promise. We first removed them from our hostels and the hostels that belong to our city. Our citizens will not let members of this group, of this [illegal] organization enter their homes. They have no reason to complain; I am doing exactly what I said before the elections. After all, our prime minister had given orders to all mayors to do whatever is necessary [to restrict all Hizmet-related organizations and activities within their respective districts]. And I am following in the footsteps of my prime minister. If my prime minister hits with a sledgehammer, I will hit with an iron bar. And I will continue to hit.”

Tweet by Ünsal İnaltekin, head of the Turkish Aviation Board (THK), for which he was convicted of “hate speech” by the Ankara 18th Criminal Court on June 27, 2014:

“Your leader, Feto [Fethullah Gülen], is so tactless as to call the prime minister ‘friend.’ Don’t bite the hand that feeds you, hashashins. It’s become clear that you are hashashins in service of the devil. We will stone you, one and all.”

*Özcan Keleş is a barrister based in the UK.