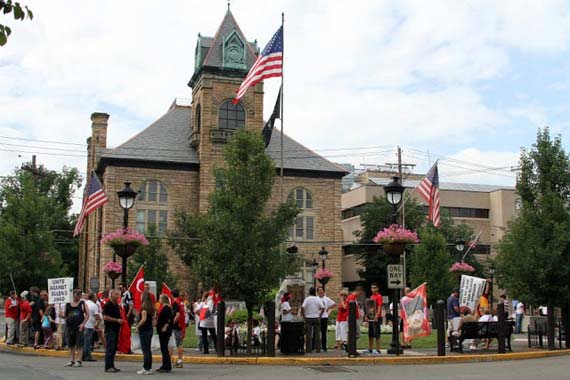 During the time when the Gezi events were at their peak, a certain group in the United States planned to carry out a demonstration in the area where Fethullah Gulen is currently residing by organizing over the Internet, similar to the way they had in Turkey.

For weeks they shared with tens of thousands of people over e-mail, Facebook and Twitter the digital fliers and slogans they had prepared. Similar to the “5-5-5-K” plan that had been plotted against Adnan Menderes, with the slogan “on the 5th of the 5th month, at 5 o’clock in Kızılay” the “13-13-13-P” plan was targeted at Mr. Gulen with the slogan “ On July 13, 2013 at 13:00 in Pennsylvania” yet, whether it was for the ill luck of the number 13, who knows, the plan was unsuccessful.

A week before the set date, through its reflection on the Internet and written media, almost every Turk living in the United States had heard of the demonstration. Within the framework of the laws in the United States pertaining to freedom of speech, one is free to carry out any demonstration provided that other persons will not be harmed and that it will not include any form of violence. The reason for expressing this detail is to call attention to the fact that although this planned demonstration is not considered illegal according to the laws and was announced to quite a vast group of people, the turnout failed to exceed 50-60 people. The video records show us that the promoters have also made frequent reference to this detail but have put forward excuses such as those who were lost on the way or those who were unable to locate the correct address.

Because the small town in which Mr. Gulen lives was comprised of one-to-two story houses lined along the sides of a narrow single-lane road, far away from any social domains or shopping centers, there was no convenient spot in which the demonstrators could park their cars, not even a small pathway in which they could walk with posters in their hands. In the video records of the demonstrators, this reality was expressed as such: “Because they were blocking the way of traffic on a single-lane road with no path for pedestrians, causing life-threatening danger, the police had “rightfully” sent them away from the area, referring them to another location 8 km away.”

A nearby church closed off their parking spaces just as the American homeowners who were neighbor to the retreat center also did. Even if the demonstrators reflect this as though the Americans had been subject to threats, this does not express any legitimate reality. Those who do know very well that if an American truly were to have been threatened, s/he would not merely grin and bear it; they would march immediately to the police department. The reality is this: Aside from sincere support to their neighbors who have been loyal to them for years, who have shared their meals during the many Ramadans spent together, these people did not want any form of unrest in the quiet and tranquil neighborhood in which they lived, and so they behaved according to the directives of the security forces.

The demonstrators were not even able to honk a horn as they passed by the retreat center, let alone stop in front of it. Contrary to what has been claimed, there was never a march-with-posters-in-hand in that area. The pictures and footage belong to the demonstration carried out by a group of 60 people, at most, in a small park 5 miles away from the retreat center in which no American other than the couple of police officers were present. Also in these video records, it is noteworthy that the demonstrators started arguing amongst each other, that the leader had trouble controlling the group and even said, “I’m out!” at one instance. In short, even those who were a part of it accept the fact that this demonstration was one that was quite imposed, constrained and coerced.

It is inappropriate to belittle people and their actions if they express a certain standpoint even if they are only six people, let alone sixty. However, the expressions used in the first fliers that read: “we must pound at the door of snakes, we must silence and defeat it” were signs of insult and attack rather than the expression of an opinion. Nevertheless, the message coming from Mr. Gulen was very welcoming: “They are welcome to come and have a cup of tea with us!” However, their response to this was that much out of proportion!

The slogans shouted out by the demonstrators and the posters they held in their hands were way below humanistic values and expressing one’s thought. The level of vulgarity was not fit for even the overly excited fans of neighborhood soccer teams. It did not fit the profile of Turks in the United States; it did not reflect the elite Turkish image and quality.

Beyond all else, there was no logic behind this demonstration, which was seen as a continuation of the Gezi events. After all, Fethullah Gulen was “a person that had expressed the fact that the Gezi Park demonstrators should be listened to and not responded to through excessive methods”. In expression of this reality, the words of Oray Eğin—who stands closer to the demonstrators rather than Gulen—in which he described the demonstration as “illtimed and void of intellect, the biggest secularist failure in the history of protest and a subject of mockery” leaves no need for any other description.

Our purpose is certainly not to insult the people that travelled from kilometers away for the sake of an opinion and an ideal—though its target and outcome have proven to be controversial. We are merely reflecting the mistakes that were made in the process. We are calling attention to the interesting contradiction of the way they waved the American flags and repeated with pride the fact that they were American citizens in video records claiming to be about ‘nationalism’. We are merely trying to voice the fact that if they had showed their own citizens a tenth of the obedience, respect and esteem they showed to the American police officers, then such a demonstration would never have been called for.

Even if we, personally, have failed to maintain our proper manner, notice the difference in the way Fethullah Gulen—whose civilized ‘invitation to tea’ was rejected and who was chosen as target to these demonstrations and unfitting slogans—approached the matter: “A human bears hostility towards that which he does not know; we are the ones at fault for, all this time, we have been unable to acquaint ourselves to them.”

It’s precisely opposition journalists who have been criticized by colleagues who until recently worked for the newspapers of U.S.-based Fethullah Gulen. These colleagues accuse the opposition journalists of betraying freedom of expression. One of them is Sevgi Akarcesme who was editor-in-chief of the Turkish English-language daily Today’s Zaman. There is a great deal of truth in Akarcesme’s claims. But who today would dare defend journalists identified with Gulen?