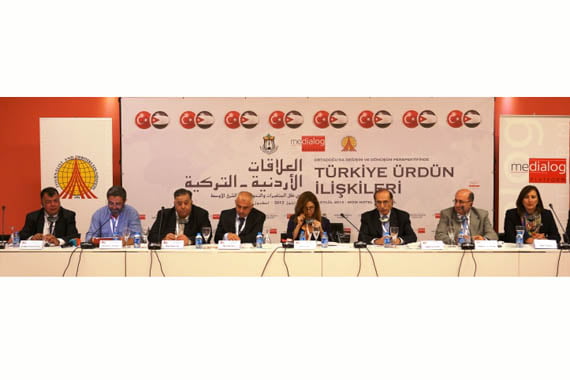 At a workshop on Turkish-Jordanian relations organized by the Journalists and Writers Foundation (GYV) in İstanbul on Wednesday, top aide to the prime minister and Ankara Deputy Yalçın Akdoğan said that Turkey pursues a value-based foreign policy, not one based on national interests.

Stating that Turkey approaches its region with the idea of soft power and adhering to a “zero problems with neighbors” policy, Akdoğan said that Turkey adopted a multidimensional policy and took the people, not the rulers, into consideration, since it is the people who are permanent while rulers change.

According to Akdoğan, the Justice and Development Party’s (AK Party) foreign policy requires them to talk even with leaders like former Libyan President Muammar Gaddafi, former Egyptian President Hosni Mubarak and Syrian President Bashar al-Assad, but when the military intervened in politics in Egypt, the government clearly took sides with the Egyptian people. “Otherwise Turkey would lose its credibility,” Akdoğan commented. He also argued that “global actors have become prisoners of Israel’s interests” in the region and are afraid of the “will of the people.”

Addressing the Turkish and Jordanian participants at the workshop, Chief Middle East Adviser to the President Erşat Hürmüzlü also said that Turkey puts its principles ahead of its interests and takes sides with the oppressed people [in the Middle East]. However, he underlined that Turkey has never encouraged people to go out in the streets and lead events in a certain direction. “We do not meddle with how people put their house in order,” Hürmüzlü added and reiterated that Turkey does not aspire to export any political model to anyone. Yet, Hürmüzlü pointed out, nothing prevents anyone from being inspired by Turkey as it undertakes reforms.

One of the panelists, Ali Bulaç, criticized the West for its Middle Eastern policies and argued that the West indirectly supported the military coup in Egypt. Yet, according to Bulaç, at the same time, the Western world pursues a campaign against Turkey’s AK Party because conservative democratic parties such as the AK Party in Turkey act as guarantors of stability in the region which, he maintains, the West does not want.

Professor Baker Akmajali from Jordan referred to the common history between Turkey and Jordan and said that for centuries, the two people lived side by side. Appreciating Turkey’s position on the issue of Palestine, Akmajali said that the core of the problems in the region lies in the Arab-Israeli conflict. In addition, Akmajali said that while more democratic rights are needed in Jordan, there is no pressure on dissent in his country.

Another Jordanian speaker, former Deputy Prime Minister and Foreign Minister Jawad Anani talked about similarities in Turkey and Jordan. He noted that in both countries religiosity is on the rise, they are both taking in immigrants and are affected by the turmoil in neighboring countries. Stating that in Jordan they pay great attention to Turkey, Anani mentioned that some Jordanians are uncomfortable with some of the scenes in Turkish TV series, though they are extremely popular in Jordan, as in the rest of the Arab world.

Another participant, columnist for Today’s Zaman and political scientist Mümtazer Türköne from Fatih University described both countries as “islands of peace” in the region in the face of a tragic increase in sectarian divisions in the Muslim world. Prime Minister’s aide Akdoğan agreed Türköne and also called Jordan an island of peace in an unstable region.

Criticizing Western policies in the Middle East, Akdoğan said, “The Middle East cannot be the chess board of the global powers” and human lives, primarily in Syria right now, cannot fall victim to power struggles among these powers.

Emphasizing the value-based foreign policy of Turkey, Akdoğan said that Turkish institutions abroad act with the idea of helping others. According to Akdoğan, within Turkey, the AK Party is still fighting against the mentality that favors military interventions and he argued that democratic institutions have been developed during their government.

11 March 2012 / BÜŞRA ERDAL, ABANT The 26th meeting of the Abant Platform, which discussed problematic areas of the constitutional drafting process, suggested in its final declaration on Sunday regarding education being given in languages other than Turkish — one of the most contentious issues that needs to be addressed in the new constitution […]