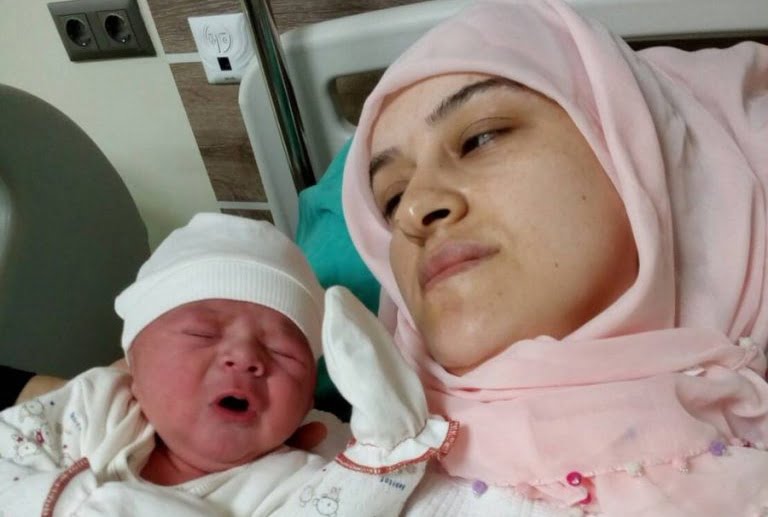 Yasemin Yılmaz gave birth to a baby in the İstanbul’s Esenyurt district on Thursday, was detained late on Monday, and Turkeypurge.com has just learned that despite her doctor’s objection, police now is at the hospital to detain the woman over her alleged links to Turkey’s Gülen group, which is accused by the Turkish government of masterminding a failed coup attempt on July 15, 2016.

Yılmaz is being sought as part of an investigation carried out in Karabük, a city located 400 km away from İstanbul. If detained, she will be taken to Karabük police station for further investigation.

Turkey survived a military coup attempt on July 15 that killed over 240 people and wounded more than a thousand others. Immediately after the putsch, the AKP government along with Erdoğan pinned the blame on the Gülen group, inspired by US-based Turkish Islamic cleric Fethullah Gülen.

However, since then, Erdoğan and other top government officials launched a widespread battle against Gülenists, jailed over 55,000 people and dismissed more than 138,000 others. Also, police have systematically been detaining women on coup charges either when they are pregnant or shortly after giving birth. At least 10 cases have so far been reported.

Speaking during a live show on HaberTürk TV on Monday, Kılıçdaroğlu said drew attention to the human tragedies caused by the ongoing purge carried out by the government. Noting that an action should be taken only if there is a concrete evidence, he said that mothers and newly-born babies are being drifted apart without any legal reason.

“State does not act out of vengeance. State does not act with anger, animosity. If there is an evidence, you take it and do what is necessary. I gave many examples. A woman gives birth. And her 5-day old kid is taken away. And she is kept at a police station for 3 days. We have objected to this. This is wrong. How can something like this happen? Let’s say, that woman is guilty. What is that kid’s crime? Let him, at least, suckle at his mother’s breast. That baby needs milk. Believe me, we have brought forward similar incidents many times. She hardly understood any of it,” Kılıçdaroğlu said.

In a similar reaction, a CHP deputy revealed the dimensions of an ongoing government crackdown on people affiliated with Turkey’s Gülen group by sharing the story of a dismissed teacher and his wife who are being held in different sections of the same prison.

Speaking during a live show on Halk TV, Atila Sertel said he paid a visit to Şakran Women’s Prison in İzmir and witnessed the ongoing violations of even the most fundamental human rights.

According to Sertel, a housewife named Fadime and her teacher husband were arrested and put in different sections of the same prison, while their children were sent to Bitlis province. The couple is accused of involvement in the coup attempt on July 15.

Sertel criticized the Turkish government for arresting hundreds of housewives on coup charges, saying that he does not understand “how a housewife can be seen as a coup perpetrator.”

Here is what the opposition deputy said during the live TV show:

“If [someone] was involved in the coup attempt… If they took up arms… And if they are personally in the loop… We have nothing to say. They are putschists and can be punished. But a housewife… As our chairman [CHP leader Kemal Kılıçdaroğlu] says: [Among those arrested] are baklava makers, coal dealers, woodsmen … housewives and people from every occupational group. Believe me, I went to that prison and I was told that… When our chairman was speaking, all the women in the cells of the prison were crying. I witnessed the same thing myself. I went to Şakran Women’s Prison where women are subjected to strip searches. They hung a banner that reads “All books except the Quran and textbooks are banned.” A rule that is not applied in any prison. After I made it public, they removed it last week. I met a woman. Her name is Fadime. She came to me with her 9-month-old baby named Merve. She has three children. One of them is 3, one is 5 and the other is 9 months. Her teacher husband was dismissed due to membership in the Eğitim-Sen union after being suspended eight months ago. He found a job at a bakery. Her house was raided [by police]. Fadime did not tell them where her husband works… Simply because she does not know which bakery he works at. They [police] called the prosecutor, and the prosecutor ordered them to detain her, too. So she was detained. And now that woman is in the women’s section of the prison, while her husband is in the men’s section of the same prison. They are not allowed to see each other because, due to prison rules, they have no such right. Two of their kids went to Bitlis, while the other is staying with the mother. There are prison cells where 15 to 16 children are staying [with their mothers]. How can a housewife become a coup perpetrator? I don’t understand,” Sertel said.