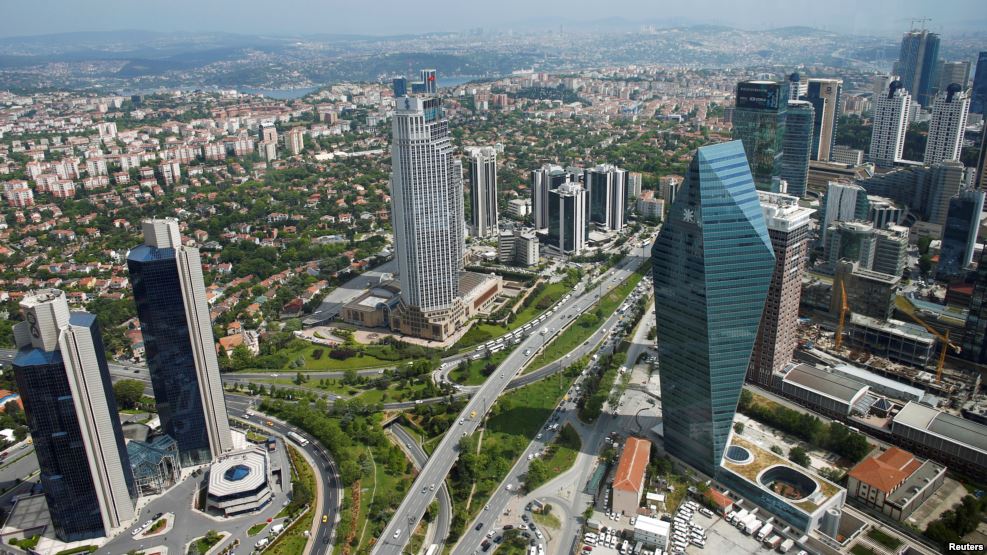 FILE - The business and financial district of Levent, which comprises leading Turkish companies' headquarters and popular shopping malls, is seen from the Sapphire Tower in Istanbul, Turkey, May 3, 2016.

Earlier this month, three of Turkey’s most prominent businessmen, the Boydak brothers, appeared in handcuffs at their mother’s funeral.

Their multibillion-dollar Boydak Holdings was seized and they were jailed, accused of being linked to U.S.-based cleric Fethullah Gulen, whom the government blames for the coup attempt.

“So far, unofficial data [show] over 300 companies have been taken into receivership or administership, total assets roughly $15 billion. These are substantial numbers,” Yesilada said. “But once the prosecutors get their hands on one company and look through the accounts, they discover interlocking shareholder relationships that lead to other companies. My personal contacts in the banking industry tell me they have received orders to freeze all accounts of a substantial number of companies. So they have not really reached the bottom of barrel.”

Yesilada said the crackdown has not posed a systematic threat to the Turkish economy, with the country’s key businesses escaping investigation. Most of the companies seized have been taken by government decree under emergency powers.

Selin Sayek Boke, a former World Bank adviser who is now spokeswoman and deputy head of the main opposition Republican People’s Party, warned that the arbitrary seizures called into question the prospect of doing business in Turkey. “If the rules of the market are rewritten by the day, then it creates a huge uncertainty. … We all know that private investment, domestic or foreign, only happens if it knows the rules of the game, if there is rule of law,” she said. “It is very difficult to speak of such an environment. Under such conditions, would you have investment in the country? You would not.”

Analysts said international long term investment in Turkey was in decline before July.

There are growing questions about how the seized companies will be disposed of, with allegations that many will be sold off to people with close links to the government and president — a charge the government strongly denies. Criticism is also growing over the lack of clarity on the rights of those owed money, or “payables,” by seized companies.

Yesilada said such ambiguity is leading to growing fear and suspicion in the business community.

“There is an intimidation factor. … The payables of a company would be delayed for a very long time, once it’s taken under receivership,” he said. “Any company suspected by rumors of being affiliated with Gulen immediately loses all supply credit and bank loans. So the impact is clearly substantial.”

It remains unclear how much Turkish banks are owed by the seized companies, but those liabilities are set to grow, with the government promising no end to the crackdown. Analysts warn that means more unemployment. An estimated 200,000 people already have lost jobs, about 1 percent of Turkey’s workforce.