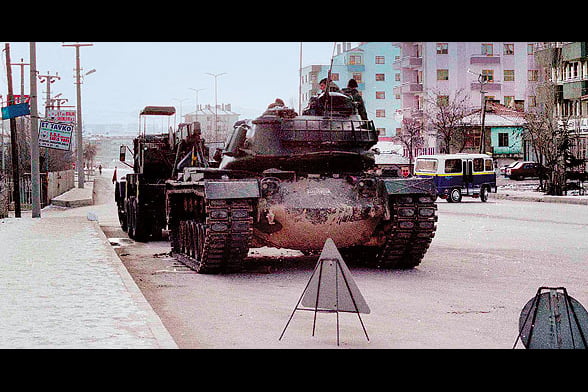 On Feb. 4, 1997, military tanks rolled through Sincan in a show of power, a “clear warning” to the government. (Photo: Today's Zaman)

Turkey has taken significant steps to settle accounts with the Feb. 28, 1997 military intervention but the country needs a new, pro-democratic, civilian Constitution to make sure that it is not faced with similar interventions, observers have said.

Today marks the 15th anniversary of the Feb. 28 intervention, known as the “post-modern coup.” On this day, a coalition government led by a now-defunct conservative party was forced to step down by the military. That was the fourth military intervention in politics, preceded by interventions in 1960, 1971 and 1980. Not only were fatal blows dealt to fundamental rights and freedoms after every coup, but democracy and the rule of law were also suspended each time. Now that 15 years have passed since the last coup, Turkey is working to settle its accounts with its coup-filled past and coup instigators. Analysts are hopeful that Turkey will eventually rid itself of the remnants of the coup tradition and they emphasize the importance of a new Constitution in facilitating this process.

Journalist Nazlı Ilıcak told Today’s Zaman that important steps have been taken to eradicate the remnants of Feb. 28 but Turkey needs to take more steps, via a new Constitution, to achieve overall democratization.

The lower coefficient was a product of the 1997 intervention and was introduced in an attempt to keep students from imam-hatip schools, classified as vocational schools, out of the secular higher education system. The coup introduced a series of harsh restrictions on religious life, with an unofficial but widely practiced ban on the use of the Islamic headscarf.

Many students faced discrimination when they went to university because of their religious lifestyle.

However, Ilıcak noted that Turkey needs to take further steps towards democratization and settling its major problems, such as the Kurdish problem, through a new Constitution, which she said would contribute to make democratization permanent.

Also in an interview with Today’s Zaman, Faik Tarımcıoğlu, a retired military judge, also dwelled on the importance of a new Constitution for preventing military interventions similar to the Feb. 28 intervention in Turkey, adding that a new and democratic Constitution will eliminate the factors that nourish military tutelage.

“Although the 1982 Constitution has been changed several times, the essence of it still remains. Some elements of this Constitution nourish military tutelage and it includes some articles that are irritating for some in the country. A democratic Constitution will not only secure Turkey’s steps towards democratization but it will also show the West the possibility of a co-existence of Islam and democracy, with Turkey as an example,” said Tarımcıoğlu.

Turkey’s expectations for a new civilian constitution have become stronger than ever since the June 12 parliamentary elections. All of the parties represented in Parliament vowed to draft a new Constitution to replace the existing one, which was drafted under martial law after the Sept. 12, 1980 military coup and has long been criticized for failing to respond to today’s needs for broader rights and freedoms.

In early 1997, uneasy with the existence of a conservative party in power — the Welfare Party (RP) — the General Staff sought ways to do away with the government. The National Security Council (MGK) made several decisions during a meeting on Feb. 28 and presented them to then Prime Minister Necmettin Erbakan, leader of the RP, for approval. Erbakan was forced to sign the decisions and he subsequently resigned. During this process, the military was purged of members with suspected ties to religious groups.

Before the military intervention, some media outlets and secular circles launched a propaganda campaign against religious communities, including the Gülen movement, in order to justify their claims of rising radical Islamism in Turkey.

A case was filed against Islamic scholar Fethullah Gülen in 2000 arguing for his conviction under the Counterterrorism Law. The prosecutor claimed that Gülen had been involved in activities to establish an illegal organization to create a state based on religion and change the secular state structure since 1989. The indictment made no reference whatsoever to any concrete action constituting a crime, as spelled out in the Counterterrorism Law. Instead, the charges in the indictment were based on Gülen’s views as expressed in print and visual media, as well as his social activities. Following a long-lasting trial, Gülen was acquitted in 2008 of all charges directed against him.

Additionally, a number of newspapers were closed down after the coup, based on an MGK decision that increased monitoring of the press. None of the military figures who had a hand in overthrowing the RP government have stood trial.

The Feb. 28 military intervention also dealt a blow to the Turkish economy as many businessmen and companies were labeled “reactionary” for being pious.

Independent Industrialists and Businessmen’s Association (MÜSİAD) President Ömer Cihad Vardan said on Monday that some businessmen quit MÜSİAD during the Feb. 28 intervention process as a result of pressure placed on pious entrepreneurs.

“Feb. 28 created the impression that pious businessmen could have no place in business life, spreading fears among pious businessmen. There were some businessmen who withdrew their memberships from MÜSİAD [due to MÜSİAD’s conservative structure] in that period. The number of our members, which was 2,823 in the middle of 1997, later shrank as low as 1,800,” he said.

None of the military figures who had a hand in the Feb. 28 postmodern coup have stood trial in Turkey so far. Just last week prosecutors summoned four civil servants from the Turkish Armed Forces (TSK) to testify as part of a probe into the Feb. 28 intervention. The civil servants were among the attendees at West Study Group (BÇG) meetings, which were held by the General Staff to brief judges and prosecutors on “reactionaryism” during the Feb. 28 process. The Ankara deputy chief prosecutor’s office is conducting the probe due to criminal complaints filed against the perpetrators of this intervention.

It turns out that journalist Ilıcak was the victim of a defamation campaign by the General Staff during the Feb. 28 process. According to a book authored by journalist Aslan Değirmenci concerning the Feb. 28 process, the General Staff launched a defamation campaign against Ilıcak due to two of her articles that were critical of the military, published in the Akşam daily on Sept. 20 and 24, 1997.

According to the book, military members were asked to write letters including insults and slanderous statements, and swear at Ilıcak. They were then asked to submit these letters to the General Staff.

Professional discrimination due to scarf-wearing wife

He said he received threats to quit his job at the Cerrahpaşa Medical Faculty of İstanbul University during the Feb. 28 process from the Higher Education Board (YÖK) and BÇG, a group established within the military to categorize politicians, intellectuals, soldiers and bureaucrats according to their religious and ideological backgrounds.

“Feb. 28 was a very difficult process for me. The cupboard [in my university office] was broken apart and my belongings were taken out of my office. Every method was used to dissuade me from continuing to work at the university. I was victimized for 10 years, both in asking for the title of specialist and the title of professor. My application to receive the title of a professor was rejected twice although I met the necessary criteria,” said Keleş.

Despite all this, the professor said he never wanted to sue İstanbul University or file a compensation case against this university, which he said is an institution for which he loves working.

During the Feb. 28 process, Keleş said he was pressured to pay the utmost attention to avoid being seen with his headscarf-wearing wife in public.

Gen. Çevik Bir, who played a major role in the Feb. 28 process, made plans for a full-fledged coup with other instigators of the Feb. 28, 1997 military intervention in 1998, a former captain said.

Retired Capt. Özcan Tozlu told Today’s Zaman that generals who were not pleased with the Feb. 28 intervention made plans in 1998 to stage a coup similar to the Sept. 12 military coup in 1980. He said the late leader of Grand Unity Party (BBP), Muhsin Yazıcıoğlu, who was aware of the military’s plans to stage a coup, commissioned 20,000 youths from his party’s youth branches to prevent a coup.

In response to a question asking why the perpetrators of the Feb. 28 intervention were not pleased with Feb. 28, Tozlu said: “[Prime Minister Necmettin] Erbakan was removed, so they [generals] could not stage a coup. They failed to prepare the necessary groundwork for a coup. They failed to ensure unity at the Turkish Armed Forces (TSK). If Erbakan had resisted the generals, the generals would have more reasons to stage a coup.”