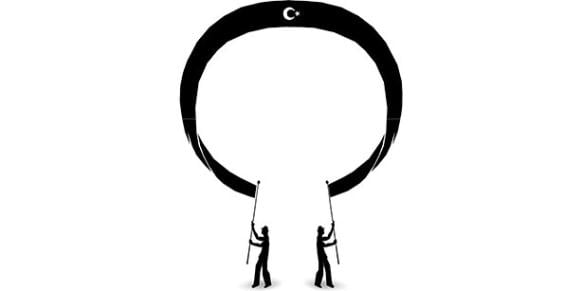 Some conservatives have taken a stance against the Hizmet movement while Alevi, liberal and Atatürkist groups have developed sympathy for it. The Hizmet movement’s staunch opposition to graft and corruption and its dauntless attitude have increased these groups’ interest in the movement. Some started to follow and lend support to the movement’s publications, depositing money in the Hizmet-affiliated Bank Asya. Thus, the recent developments have the potential to mitigate the religious-secular, Alevi-Sunni and Kemalist-Islamist dichotomies. This moment represents a historic opportunity for the Hizmet movement and conservative groups to move closer to liberal, leftist and Alevi groups. If the movement and its supporters can take advantage of this moment, the effects of these attacks on non-Hizmet groups may contribute to social peace, remove barriers and close the gaps between opposing groups and beliefs.

“My uncle is leftist, but he now reads the Zaman newspaper. He is a staunch supporter of the CHP [main opposition Republican People’s Party], but he says he has trust in the Zaman newspaper,” one of the respondents in an interview referenced in the first of this series of articles said. “We can now contact our leftist colleagues more easily. We can now come together and chat with each other and we can understand each other,” one journalist said. Those who once saw the Hizmet movement as the “cohorts” of the ruling Justice and Development Party (AKP) have now started to show respect for it. Alevis empathize with the movement, as the latter is now going through similar pressure to what they have been facing for decades. Many leftists have let go of their prejudices about the movement. One interviewee said: “We were visiting people to convince them to subscribe to the Zaman newspaper. We visited someone who is a supporter of the Labor Party (İP) and explained our intention. ‘Would you subscribe to the Zaman newspaper?’ we asked. ‘No one has asked that question before,’ he said, and subscribed to the newspaper.” A prep school director we interviewed said: “Previously, 80-90 percent of our students came from conservative families. With this process, about half of our students now come from leftist families. With them, we eat maklube — a special dish that is a favorite among the members of the Hizmet movement. They tell us that they are happy with their kids’ learning how to recite the Holy Quran. This is an opening to a new group.”

Leftists, Atatürkists and some liberals initially questioned the tension between the AKP and the Hizmet movement. Over time, they have started to appreciate the movement’s stance regarding unlawfulness, authoritarianism, and corruption and support its critical reproach. If these developments can end years of ideological confrontation and polarization, this will certainly prove to be an achievement for social peace. Yet the dialogue between the two camps should be made more systematic and efficient. The movement’s unyielding stance against corruption and authoritarianism has increased the prestige of conservative groups in the eyes of the rest of society. If the movement had not acted in this manner, people would make generalizations, saying, “All religious people are like them [supporters of the government].”

Although they were exposed to unprecedentedly heavy insults, the members of the Hizmet movement have managed to restrain their anger and have not been involved in any breach of public order. They survived this test of their patience. The use of insults against the movement — insults that the Kurdistan Workers’ Party (PKK), the Islamic State of Iraq and the Levant (ISIL) and al-Qaeda are spared — has hurt them considerably.

Members of the movement see this as a divine test in which their patience and sincerity is measured. “Some members of the Hizmet movement do not have a sufficiently matured democratic mentality regarding universal human rights and values, as they see ill-treatment of Kurds as normal and the movement’s media outlets have failed to defend the rights of victims from other groups,” an interviewee noted, adding that the process may help the Hizmet movement realize certain errors. Overall, members of the movement believe that this experience offers them an opportunity for empathy and self-criticism. “Previously, other social groups have been victimized, and we failed to recognize it. Now, we understand them. To see and to know is something else! Currently, we can understand it. “This process proved very instructive in terms of empathizing with the victimized groups,” another interviewee commented. “During this period, our faith in our cause has increased. We feel the honor and tranquility of standing against tyranny and injustice. We now have a better understanding of the importance of attaining God’s contentment with our deeds, but we feel sorry for other Muslims’ failure to stick to Islamic values,” another said.

Members of the movement working abroad were also interviewed. While they are relatively at ease, they have concerns about their sisters and brothers in Turkey. It is said that the instructions President Recep Tayyip Erdoğan issued against the Hizmet movement failed to produce the intended effect, as public officials refrain from taking sides, but keep their distance from the movement out of fear. Although Erdoğan publicly targeted Hizmet schools abroad and tried to convince foreign presidents to shut down these schools, his efforts proved mostly ineffective, excluding a few cases. On the contrary, these “Turkish schools” have risen in prominence and the number of these schools has increased. People and officials in many countries believe that the government of Turkey is growing more and more authoritarian, losing prestige across the world. The interviewees from Europe note that European countries are concerned about Erdoğan’s politicization and mobilization of Turkish citizens in Europe, which goes against the interests of Turkish expats in the long run. The politically motivated rallies Erdoğan held in Europe have provided justification for far-right parties’ xenophobic efforts in addition to creating uneasiness in European countries.

Ten journalists we interviewed indicated that the media sector suffers from the most serious and systematic pressures. Many journalists have failed to resist pressure exerted by ruling party on media bosses via financial inspections and advertising mechanisms. A journalist commented: “At the top, media bosses are pressured directly by Erdoğan, but this pressure trickles down to lower levels. The pressures are systematic and continuous.” The journalists pointed out that the media sector is largely dependent upon public resources, undermining the security of their right to information. In this process, the pro-Hizmet media outlets and journalists have faced serious marginalization as their journalistic abilities are considerably hindered. Despite the strict accreditation schemes implemented by the government, there has not been a decrease in the circulation figures of the movement’s newspapers.

Actually, a paradoxical development has been under way since Dec. 17, 2013. Partisanship is on the rise while the right-left dichotomy is getting less and less pointed. Indeed, it has become clear that conservative and religious people may vote for different parties. Some nationalists have allied with the AKP to attack the Hizmet movement while liberals and some Kemalists lend support to the movement. While it is suffering from certain hardships internally, the Hizmet movement is garnering increased interest and curiosity around the world as a civil movement that refuses to yield to a government that is growing more and more authoritarian. The unrelenting stance of the police officers who conducted the police operations on Dec. 17 and 25, 2013, but later faced the government’s intimidation efforts, has boosted the morale of the anti-AKP groups, as the intimidation strategy failed.

The members of the movement see this process as a “beneficial” one that has helped them distinguish themselves from a political party and corrupt politicians.

*Mahmut Akpınar is an associate professor of political science.