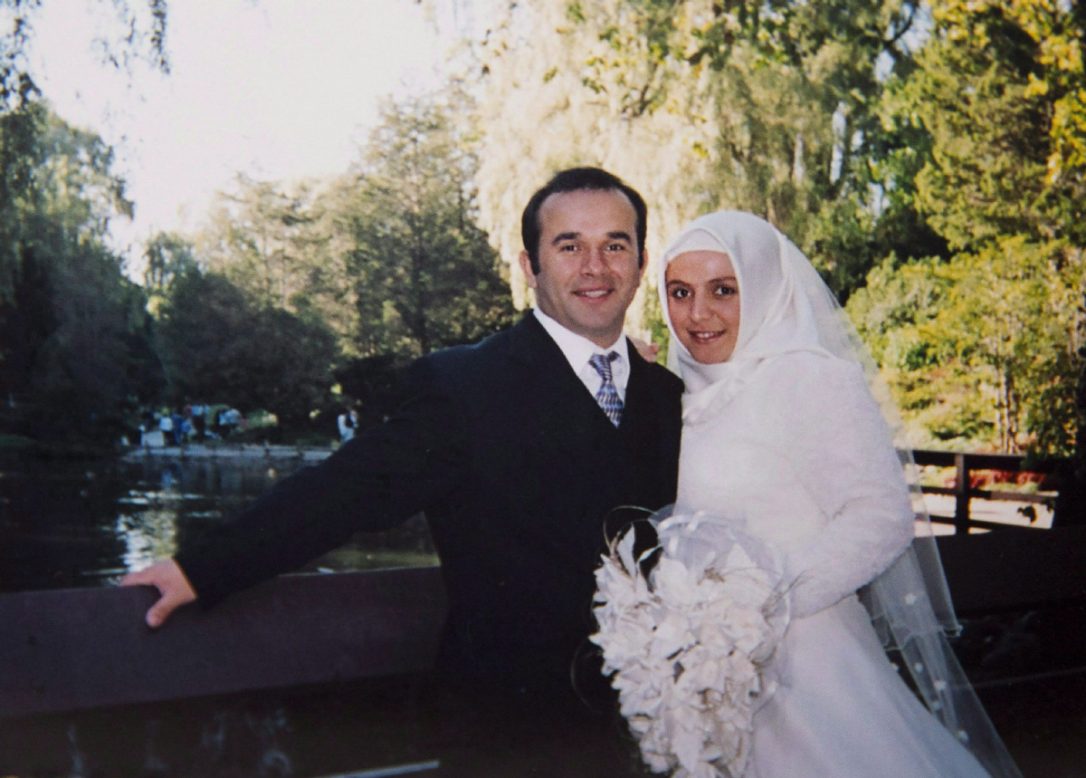 A Calgary imam who has spent more than seven months in a Turkish prison has court date scheduled for today. A photo of a wedding picture of Rumeysa Hanci, right, and imam Davud Hanci, is seen in Calgary on in an August 2016 file photo. (LARRY MACDOUGAL / THE CANADIAN PRESS)

The case of a Calgary imam who has spent more than seven months in a Turkish prison will remain in limbo for another two months.

Davud Hanci was expected to appear today before a judge by video conference on allegations he helped orchestrate last summer’s attempted coup.

But his sister-in-law, Ruveyda Durmus, says the case has been delayed until May 3 because of a secret witness.

His wife says an earlier court date for Hanci, who has Canadian and Turkish citizenship, had been set for Jan. 31 but was postponed because of lack of evidence.

Rumeysa Hanci says worrying about her husband since his arrest last July has been like torture for her and their two young sons.

She says her husband is a peaceful man and the allegations against him are ridiculous.

“I feel so extremely overwhelmed. It’s really difficult to fight,” she said after ushering the couple’s two young sons out of the room so they wouldn’t be upset by her talking about their father.

“My mind is so full of everything.”

She said her husband is being kept in solitary confinement and has not been allowed visits or phone calls with family, but he has been able to see his lawyer face-to-face.

“She says he’s trying to be strong,” said Rumeysa.

Relatives have said the couple and their two sons, who are eight and nine, were in Turkey last July visiting the imam’s ailing father in Trabzon on the coast of the Black Sea.

Shortly after, he was moved to a prison nearly 1,000 kilometres away in the province of Kocaeli east of Istanbul.

“The accusations are so ridiculous,” said Rumeysa. “I want Canadians to know a good man is staying there without any evidence.”

Turkish news reports have accused Davud Hanci of having ties to Fethullah Gulen, a U.S.-based cleric whom the Turkish government accuses of masterminding the July 15 coup attempt.

Turkey has arrested tens of thousands in its investigation into the failed coup, and dismissed or suspended more than 100,000 people from government jobs.

Michael O’Shaughnessy of Global Affairs Canada called the case a priority, though he said privacy considerations prohibit him from discussing it in detail.

“We are actively engaged on this case, and doing everything we can to support the family,” he said. “Parliamentary Secretary Omar Alghabra has met with the individual’s family, and consular officials remain in regular contact.”

Rumeysa said the ordeal has been tough on their sons.

“They need him so much. So they keep asking questions like when he will be home,” she said.

“The boys are apart from their father and it’s hard to find answers to their questions anymore.”

“I want this torture to end as soon as possible,” she said. “I want him back home. I want him seeing my boys growing and taking care of them.”