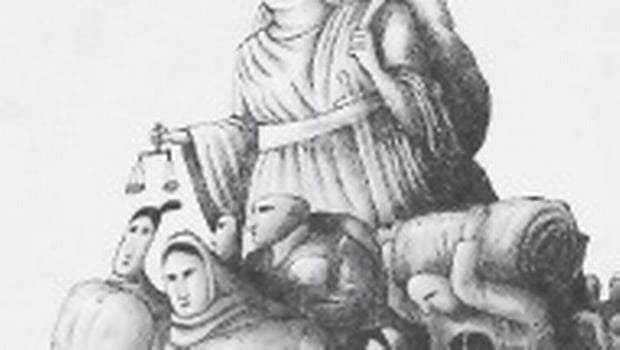 The show, opening on Saturday at the gallery in Midford House, off MG Road, features the takes of 70 cartoonists from across continents on the refugee crisis in Europe.

These are the top entries of a contest conducted three months ago by Istanbul-based NGO Kimse Yok Mu.

“IIC supported the event. In fact, they wanted me to be part of the jury, but I wasn’t able to go to Istanbul,” says IIC’s managing trustee V G Narendra.

So he decided have the some of the best cartoons flown down to the city for all Bengalureans to see.

The exhibition, the first featuring these works, is being organised in association with Kimse Yok Mu and Indialogue Foundation, which works to facilitate inter-cultural dialogue.

“We thought it was crucial to bring the exhibition to India because here we are rather cut off from the sufferings of the Syrian refugees,” says Ibrahim Nasther, Indialogue Foundation’s representative in the city.

“And I noticed very few entries from the country.”

Of the hundreds of entries that poured into Istanbul, it seems none from India met the mark, observes Narendra.

“The ones selected are varying in style – some have detailed, hand-drawn lines, some are black and white, some colourful. But none of the ones from Europe have captions or text in any other form, a technique our cartoonists could perfect,” he says.

“The cartoon in itself tells the story beautifully.” 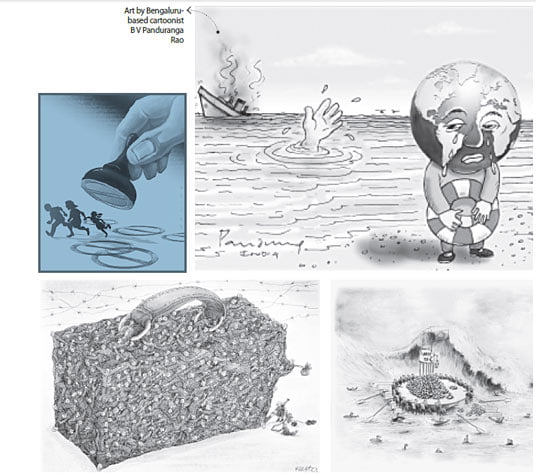 The show will be inaugurated by Chiranjeevi Singh, president of Alliance Francaise de Bangalore and retired IAS officer, at 11 am on Saturday.

It goes on till April 9 at Indian Institute of Cartoonists, Midford House, Midford Gardens, off MG Road.

The gallery is open between 10 am and 6 pm, except on Sundays.

Participation from the City

Bengaluru-based cartoonist B V Panduranga Rao hardly ever misses a contest even at 72, and the one on refugees was no exception.

He explains the thought behind his cartoon, Refugee Returned: “The refugee is crying out for someone to save him from drowning, and the world is in tears, but stands frozen. We pity the refugees, the plight they are in, but make no move to help. I believe governments across the globe should come together and take responsibility for refugees.”

His work might not be among the 70 that the exhibition will feature, but Rao is looking forward to seeing his fellow cartoonists’ depiction of the issue.