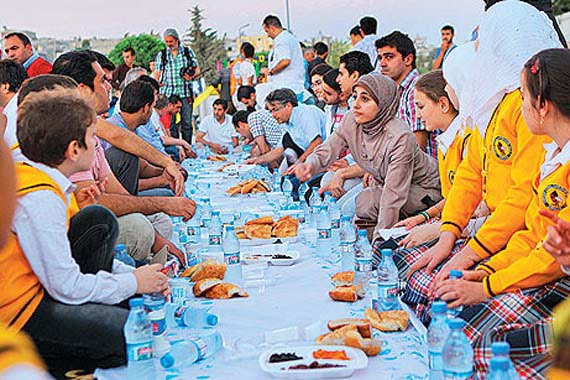 A group of Turkish businessmen join an iftar dinner with Syrian refugees in Kilis province. They also visited the homes of Syrian refugees and handed out food packages and listen to Syrian problems. (Photo: Cihan)

A group of Turkish businessman traveled to Kilis province on Wednesday to join an iftar dinner with Syrian refugees, according to media reports.

Members of the Florya Businessmen’s Association (FİADER) of Istanbul, representatives from the Kimse Yok Mu charity, Kilis Governor Süleyman Tapsız and more than 220 businessmen from various organizations attended the iftar with Syrian refugees. The iftar was hosted by the Kilis Governor’s Office.

The members of the Turkish businessmen’s group visited the homes of refugees and handed out food packages. The businessmen also listened to the problems facing the Syrian refugees before breaking their fast. The group then sat down for the iftar at a soup kitchen established for Syrian refugees by Kimse Yok Mu.

After iftar, one of the Syrian refugees gave a speech in Turkish, saying: “We are refugees here and you have left your homes and your children and you have come here to have iftar with us. We are very happy and grateful for what you have done for us.”

Taha Holding CEO İsmail Kısacık also spoke. “What we have seen here shows us the tragedy of our Syrian brothers, who have been suffering from a civil war which broke out in their country. It is time to help them as much as possible and I want to express my thanks to everyone who has been there for our Syrian brothers and sisters and helped them.”

Süvari Clothing Board of Directors Chairman Ahmet Coşkun also said: “We clearly understood how much the Syrians, who have been staying here for quite some time, are in need and everyone should immediately begin to help our brothers here. I will do my best to help the Syrian people, who are very much in need.”

Governor Tapsız also gave a speech, saying: “I want to thank all of you for coming here to share the joy of Ramadan with us. On behalf of our Syrian refugees, we are truly grateful and appreciate your help and your kind visit here.”

Nur Textile Board of Directors Chairman Muzaffer Durmuşoğlu also said: “When we saw what conditions our Syrian brothers and sisters have to live in, we clearly understood their situation here. For the last two years, our state and many charities, like Kimse Yok Mu, have done many things for the Syrian people and continue their humanitarian work. This is why we wanted to come here to help the Syrian people. We cannot solve all their problems but we can still share their pain. May God bless them and everyone who helps them.”