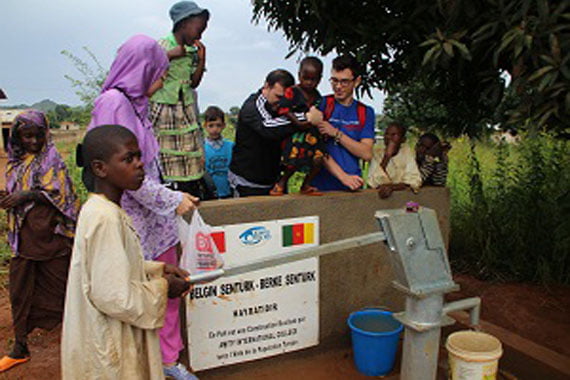 Kimse Yok Mu Bursa Chapter’s efforts launched four months ago in order to establish water wells in African countries have started to bear fruits. With the money from fundraisings and several drives, 16 water wells have been made available to the locals in N’Gaundere region of Cameroon.

KYM Bursa Chapter’s director Sadullah Hizan said they witnessed extraordinary life stories during their campaign. He further summed up the campaign’s goals as follows: “Our aim is to provide clean water to those who have to take miles for a single drop of water; to ward off epidemics caused by contaminated and unhygienic water; to restore agriculture by providing irrigation to barren lands; to instill hope into the locals and help the region’s development.”

“One of our volunteers went to visit his relatives out of town after donating for a water well in his late father’s name. He said one of the relatives saw his father asking for water in his dream, which is very thought-provoking. Moreover, another volunteer donated all her wedding jewelries. A young student sponsored one by donating the money he had saved for a mobile phone he wanted very much. A retired couple gave away their savings too. We listened to these stories and many more,” the director said.

Hizan noted that a teacher working for the local Turkish school initiated the construction work and that they completed 16 of them to date. “The Cameroon people including the N’Gaundere governor are thankful to Turks for their friendly assistance.” He additionally revealed they will keep up their aid parallel efforts.

The Turkish aid organization Kimse Yok Mu, which has become the latest target of the Justice and Development Party’s (AK Party) witch hunt, delivered aid in Palestine, including in Gaza, with approximately 100 volunteers from Turkey over the weekend.

The Cameroon delegation had meetings with KYM officials, as a part of a newly founded charitable foundation in Cameroon. They seek benefiting from KYM’s experiences and using them in their charity work. They were pleased with the warm reception and KYM Bursa director Sadullah Hizan’s presentation on the foundation’s work.