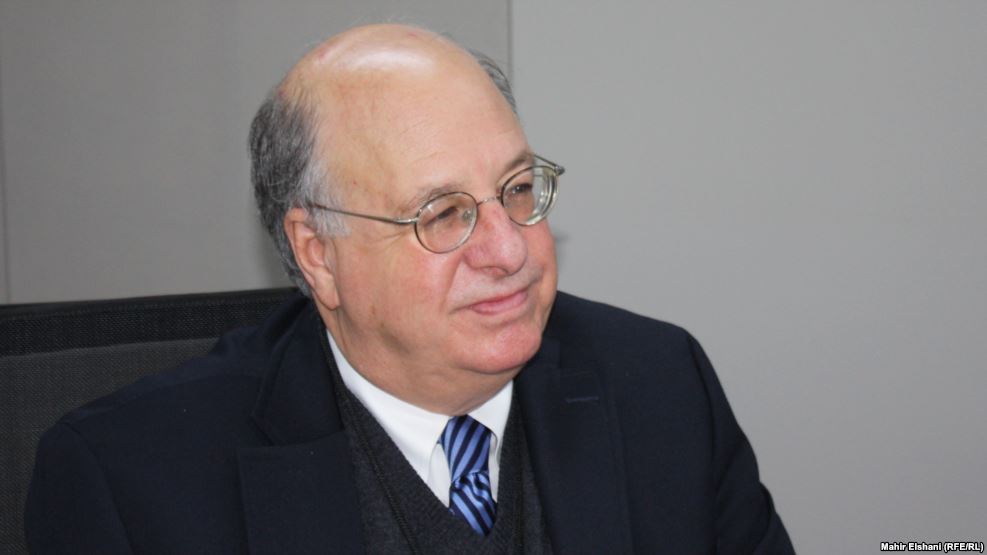 Judge Mark Wolf: "When the attempted coup occurred in July, within 24 hours there were arrest warrants for almost 3,000 judges. And it's very clear, and in fact it's been admitted by the deputy chair of the High Council, that that list of judges had existed for years."

Mark L. Wolf is a senior U.S. federal judge who went to Turkey in 2012 to help train the country’s prosecutors and judges to be more independent and more impartial.

In an October 25 interview in Prague with Abbas Djavadi, regional director of programming at RFE/RL, Wolf shares his views on the situation of rule of law in Turkey following the attempted coup in July.

RFE/RL: According to judiciary sources in Turkey, authorities have recently either fired or arrested as many as 3,700 judges and prosecutors. They are alleged to have links to U.S.-based Muslim cleric Fethullah Gulen, who is accused of masterminding the July coup attempt. How do you view this crackdown on members of Turkey’s judiciary?

Judge Mark Wolf: Even before the coup [eds. attempt] in July, the judiciary was being essentially taken over by Prime Minister Recep Tayyip Erdogan [eds: who served as prime minister before becoming president in 2014]. When the attempted coup occurred in July, within 24 hours there were arrest warrants for almost 3,000 judges. And it’s very clear, and in fact it’s been admitted by the deputy chair of the High Council [of Judges and Prosecutors, the body that selects and assigns judges], that that list of judges had existed for years. That list wasn’t prepared in the hours following the coup, but the coup provided an opportunity — perhaps a pretext — to not just demote people who might stand up for the rule of law, but to lock them up.

RFE/RL: The crackdown is not only targeting judges and prosecutors. A total of more than 50,000 government and state employees, including members of the military, academics, and teachers, have been fired since July, and some of them are sitting in prison right now. What can you say about the judicial proceeding?

There’ve been some special courts set up to handle the detention cases, but it’s impossible to imagine that any judge in Turkey would fairly preside in a case and decide that the defendant, the person being charged, was not guilty of being linked to this [alleged] terrorist organization associated with Gulen, because it’s foreseeable that judge would then get locked up. And, indeed, there are reports of judges crying as they have detained their former colleagues, knowing that it’s unjust but also knowing that if they didn’t order the detention they would be the next in line to go to jail.

RFE/RL: Is this situation new for Turkey? Back in 2012 and 2013, the Ergenekon and Sledgehammer coup cases raised serious concerns about the independence of Turkey’s judiciary.

Wolf: Turkey does not have a wonderful history of an independent judiciary and honest prosecutions, but it did — in 2012 and 2013 at least — have a group of people who were trying to establish an honest, impartial, independent judiciary and…prosecutors as well. And now that effort has been frustrated, it was being frustrated, the effort was being suppressed before the coup attempt and that effort has accelerated and has received momentum since the coup attempt.

RFE/RL: The Turkish government is calling on the United States to hand over Gulen, with top officials threatening Washington that Ankara would cut ties if he were not extradited. Where are we with the extradition of Gulen, who is a permanent resident of the United States?

Wolf: My understanding is that no formal extradition request has been made [by Turkey]. When that request is made, there’s an established legal process in the United States that’ll have to be followed, which I understand will eventually include a United States district judge like me — but not me — deciding whether the standards for extradition are met.

Those standards include the following: One, there’ll have to be reliable evidence that Mr. Gulen committed acts which would be a crime in Turkey and also a crime in the United States. That evidence may exist, I don’t know.

Now, some other judge will have to decide this. I haven’t seen the evidence, I haven’t seen what assurances might be given. But is it possible to imagine that if Mr. Gulen is returned to Turkey he will receive a fair trial?

RFE/RL: Do you think the West is doing enough to encourage respect for the rule of law in Turkey?

Wolf: Turkey is an important military ally of the United States in the battle in Syria, in the battle against [the Islamic State group]. Turkey is an important barrier to refugees overwhelming Europe and I think these countervailing considerations have caused the United States and its European allies to be mute or much less emphatic about the importance of observing the rule of law in Turkey.

In my view — well, this is a difficult dilemma for somebody in the [U.S.] executive branch — the president [Barack Obama] and those who work with him. It’s short-sighted. Turkey is a NATO ally, the NATO alliance is intended to be made up of democracies and I think if Turkey does not observe the rule of law it will not be a reliable or ultimately valuable partner to the United States and its NATO allies.

So, the situation in Turkey has created difficult challenges for the United States and its allies, but I think if we’re not more energetic in advocating for the rule of law it will be shameful, we would have allowed honest judges, prosecutors, and others to be detained and have their families and their lives destroyed. And, ultimately, we would not have a faithful ally.