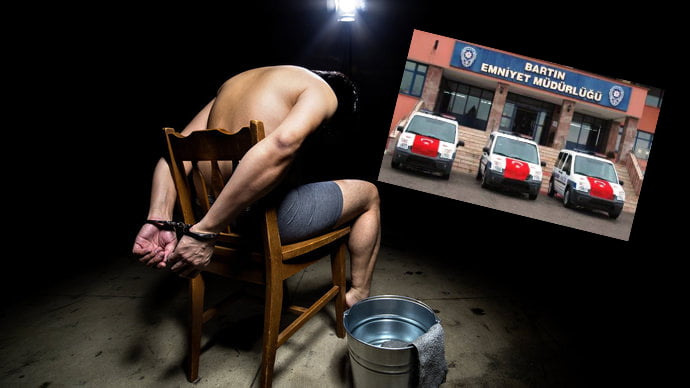 A Bartin man, identified with his initials D.G., was bound to a chair and pushed into sea on multiple times as police officers tortured him while under custody, according to Aktifhaber online news portal.

Detained as part of an investigation into the Gulen movement in the northern province of Bartin in October 2016, D.G. was put in pre-trial detention after days of torture, he told his brother during latter’s recent visit to the prison he is being held now.

The visiting brother said in a letter to Aktifhaber on Sunday that he returned to Turkey from abroad to see his brother a year after and that he had difficulty in recognizing him due to maltreatment he was reportedly subjected to.

“The cheerful young man whom I saw the last time a year ago has turned into a weary-of-life person whom I am no longer able to recognize with his grey hair and beard, weighing 10 kilograms less,” the brother said.

The first day under detention passed with threats from police officers who asked me to remember all the people D.G. knew to be affiliated with the Gulen movement, the letter read.

“The second day they took me to a without-window, storehouse-like room in rust and dirt. …I was seated on a dirty desk with my hands cuffed behind back. I did not know about the people they were asking and I had no idea about the questions they directed to me. Whenever I said I have no idea, they beat me. Threatening with rape, they would hold my head straight while another police officer, called Ahmet was sliding a baton into my mouth. Meanwhile, another one, named Ozcan was always slapping my face.

“The third day, Kaya and two police officers whose names I learned after a while as Ayhan Celik and Ilkay Boynuegri came to the room. Ayhan was holding a document. ‘Look at this, you will sign this at your own will and tell your lawyer what is written here. Otherwise, forget your family. They battered me on the floor when I refused. Then, they put a trash bag over my head and they lighted up cigarettes when they were tired. One of them blew the smoke inside the bag. He did this over and over for 3-4 times. I had never smoked before. I thought I was going to die inside the bag.

“The fourth day, Ayhan, Ilkay and Ozcan came over again. Ilkay said with laughter that he got the approval of Tolga Sipahi, the head of the Department of Anti-Smuggling and Organized Crime. Then, we got into a white Ford Focus. They covered my eyes. I was hearing the waves’ sound. They made me sit on a chair and tied to it. Suddenly, they lifted me to air and dropped to the sea after counting 1, 2, 3. I was not able to move due to the chair and I was drowning. They would get me out of the water only when I felt fainted due to the water I swallowed. I swallowed too much water. They did this torment on me maybe 10 times. …It was the month of October and I was shivering with cold.

“Several days later, a lawyer, named Duygu Tufan from the bar association dropped by. She had been assigned to my case. She got into the interrogation room. When we were alone, I mentioned about the torturous treatment. ‘Don’t waste your breath. Thank your lucky stars. These men are murderers. They see red. If you want to see your family again, accept whatever they ask. Do not say a word about torture to anyone, or they will kill you,’ she told me.”

D.G. is reportedly held with 26 inmates in a holding cell that is built to host only 16 people and all of the people kept in the same call with D.G. was subjected to maltreatment and torture, according to the letter.