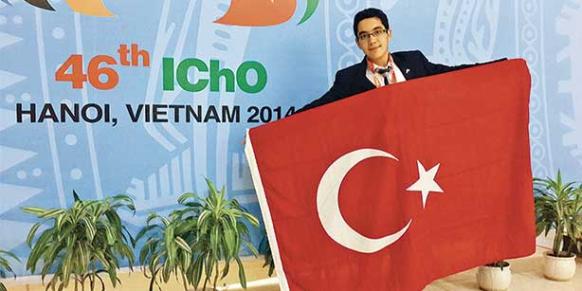 Furkan Bahar, a student from Yamanlar Koleji, a private high school in İzmir, has won a gold medal at the 46th International Chemistry Olympiad (IChO) held in Hanoi, Vietnam between July 20 and 28.

IChO welcomed representatives from 77 countries. Bahar, a member of the national chemistry team appointed by the Scientific and Technological Research Council of Turkey (TÜBİTAK), became the winner of Turkey’s only gold medal in the competition.

“I am happy to raise our flag,” Bahar said, adding, “I wish to become a scientist by pursuing my undergraduate education in chemistry at one of the world’s high-ranking universities.”

Bahar’s victory followed the success of one of his peers from Yamanlar Koleji, Osman Akar, who won a gold medal at the 55th International Mathematical Olympiad (IMO) held in Cape Town earlier in July. Akar was Turkey’s only competitor to walk away with a gold medal in the math competition.

Sebahattin Kasap, general director of the Yamanlar Education İnstitutes, has said that the students’ success at the international olympiads is a source of pride and honor for their school as well as for the Turkish nation.

“Our private high school has won 147 of the 433 total medals Turkey has won at the international science olympiads so far. We are the school that has brought our country the most medals. We are fighting with the world for Turkey,” Kasap said.