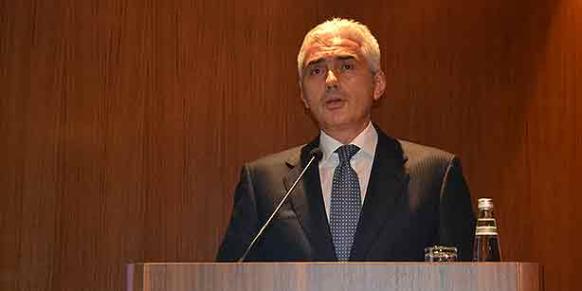 Turkish Industrialists and Businessmen’s Association (TÜSİAD) Chairman Haluk Dinçer has said that he does not see any “parallel structure” within the state as is asserted by pro-government circles, adding that discharging some police officers on accusations of illegal wiretapping does not prove the existence of such a structure.

In an exclusive interview with the Hürriyet daily, Dinçer evaluated the issues occupying the Turkish agenda, such as the alleged “parallel structure” within the state and some recent government-backed operations conducted against the police force and some media outlets.

President Recep Tayyip Erdoğan had told Dinçer he does not see much support from TUSİAD for his efforts “to combat the [so-called] parallel structure” during the High Advisory Council meeting held by TUSİAD in September of this year. In response to questions on the president’s remarks, Dinçer said claims about the existence of a “parallel state” are very serious and TUSİAD cannot have any role in any struggle against the so-called “parallel structure.” He said it is an issue that should be referred to the judiciary.

The “parallel structure” is a term invented by Erdoğan to refer to followers of the Hizmet movement inspired by Turkish-Islamic scholar Fethullah Gülen, particularly followers within the state bureaucracy.

“If there really is a parallel structure, the National Intelligence Organization (MİT) and the police are those who should reveal it,” Dinçer said.

When reminded of the discharging and detention of hundreds of police officers on the grounds that they were involved in the so-called parallel structure as part of some recent successive government-backed operations conducted against the police force since July of this year, Dinçer said that discharging or detaining some police officers does not prove anything. “I do not see anything has been revealed [as a result of the operations against the police]. The institution that should reveal all this is the judiciary. What can TUSİAD do about the parallel structure? I do not see anything. What I see is that some police officers were arrested on charges of illegal wiretapping,” Dinçer said, adding that this issue does not have anything to do with a parallel structure.

Dinçer commented on a recent government-orchestrated crackdown on the Turkish media in which Zaman Editor-in-Chief Ekrem Dumanlı was detained then released, and Samanyolu Broadcasting Group (STV) General Manager Hidayet Karaca was arrested on charges of being a member of a terrorist organization. The TUSİAD chairman stated: “As the esteemed president says, this [claims of a parallel state] should be revealed if it really exists. Of course, we have heard some speculations about this structure, but these all are speculations. The judiciary is the one that will reveal the truth. In this sense, I believe that there is nothing concrete regarding the issue. The fact that several people were arrested over claims that they are engaged in illegal wiretapping did not reveal the parallel structure.”

Commenting further about the media crackdown, Dinçer maintained: “We still don’t understand what kind of relation might exist between the parallel state and the detention of the Zaman editor-in-chief and the STV general manager based on a TV series. There might be a struggle between two communities [the Hizmet movement and the Tahşiyeciler group], but I do not see any parallel state.”

Dumanlı and Karaca were taken into custody on Dec. 14 as part of a police operation against the Hizmet movement. They were detained along with 28 others in an operation that targeted journalists, TV scriptwriters and former police officers. The operation was conducted based on an investigation that was conducted into an al-Qaeda-linked terrorist group called Tahşiyeciler (roughly translated as annotators).

‘There is no impartial and independent judiciary in Turkey’

Stating that the allegations directed at the Hizmet movement, also known as the Gülen movement, are very serious, Dinçer said that it is not possible for himself or TUSİAD to know whether these allegations are true or not. “If you remember, there were also serious allegations in the political trials like Ergenekon and Balyoz [Sledgehammer] that were highly publicized. Today, we have arrived at a point where it is not completely known what is true, false or fiction. We clearly see that Turkey needs a healthily operating judicial process to make all these allegations clear. However, we have seen that the public no longer has respect and confidence in the judiciary due to what happened in the past. We also see that there is no impartial and independent judiciary in Turkey. Thus, we do not believe that there is an appropriate atmosphere to prove the allegations.”

In response to a question on whether he believes the Hizmet movement is a criminal organization — as is asserted by pro-government circles — Dinçer stated that crime is done by an individual. “You cannot say the whole Cemaat [Hizmet movement] is criminal if several people from it are involved in a crime, or even if its leader commits a crime. Such a thing does not exist in law. Secondly, although these [allegations] have been referred to the judiciary, there are deep concerns regarding the independency of the judiciary in Turkey. I see that the processes [judicial proceedings] are not transparent.”

Dinçer added that Turkey cannot be a state of law without impartiality and transparency.

Dinçer was also asked to evaluate two developments from last week– the return of money with interest confiscated from graft suspects during police raids last year and the recent delay in a parliamentary graft commission’s decision to determine whether ex-ministers implicated in the graft probe will be tried by the Supreme State Council (Yüce Divan).

Commenting on the issue, the TUSİAD chairman said that they know for sure that there is corruption in Turkey and its prevalence is on the rise. He said the corruption indexes released recently by the Organization for Economic Cooperation and Development (OECD) and Transparency International also show the increasing tendencies of corruption in Turkey. Dinçer stated: “In a survey conducted by us [TUSİAD] with 800 businessmen, 37 percent said intense corruption exists in the sectors they are working in, while 46 percent said the corrupt tendencies are on the rise. Actually, the Dec. 17 events were not so astonishing for the Turkish business world.”

‘Gezi not a coup attempt’

Dinçer was asked how he evaluates the government’s labeling of the Gezi protests — nationwide street protests that erupted in May 2013 over the government’s plan to demolish a central park in İstanbul’s Taksim district — and the Dec. 17 investigations as “coup attempts” against the Justice and Development Party (AK Party) government. He said TUSİAD does not believe the Gezi protests was a coup attempt, adding that they were a based in “environmentalist sensitivity and were a democratic reaction to an authoritarian stance.” Dinçer also said that some ill-intentioned people may also have been involved in the protests, but he added that defining the Gezi protests as a coup attempt is not right. He also said that if there was anything illegal about both the Gezi protests and the Dec. 17 investigation, it should have been revealed by now.

In response to a question over the relations between President Erdoğan and TUSİAD, Dinçer stated that TUSİAD does not have any problem with Erdoğan. Indicating that TUSİAD works with the prime minister and ministers related to the organization’s efforts, not the president, Dinçer said: “In a meeting after I came to my position, I offered President [Erdoğan] the chance normalize our relations by forgetting the tensions that took place in the past. He responded to this offer positively. I invited him to our High Advisory Council meeting, and he attended it. It is true that he made some harsh statements during his speech [at the meeting]. However, when you analyze the text of his speech, you can also see some positive statements, too.”