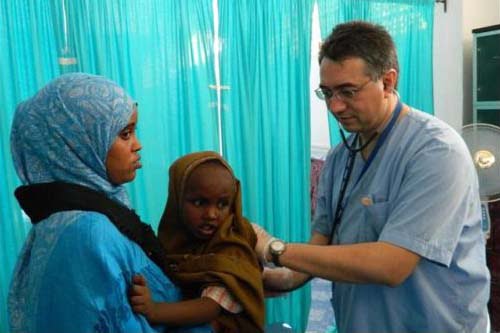 Turkish doctors going to Somalia with the international relief organization Kimse Yok Mu (a Hizmet Movement organization) are the hope of thousands of Somalians these days. In the midst of civil war and famine tens of thousands of people struggle with countless diseases. In this country with ~2,800,000 immigrants and with an inadequate health and education system, Turkish doctors are the only hope for these patients. These doctors who come to Somalia every two weeks in groups are the greatest support for Somalian people in these difficult times.

Doctors go to work in early morning hours every day with excitement. They are escorted to the hospitals by the soldiers because of security concerns. Tens of patients, majority are children, wait in the hallways for the doctors arriving with the medical equipment and medicine that they bring with them from Turkey. Local staff tries to help them and their relatives while they wait in the hospital corridors.  Poor living conditions of the country seem to have inflicted the small children with many different ailments. Some are in their mother’s arms, others on wheeled beds, these little infants are waiting for their turn to be seen by a doctor. 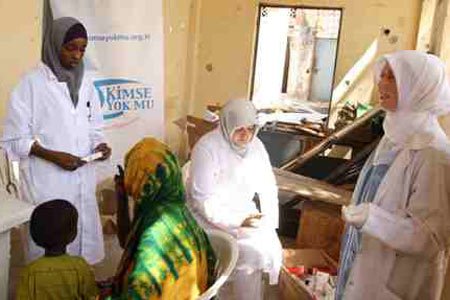 The volunteer doctors work with great sacrifice under poor conditions and sometimes perform surgeries with limited supplies and lacking equipment.

Sadi Yaldiz, MD, one of the volunteers, says to Cihan News Agency, “We have no expectations by volunteering here other than having the pleasure of giving a hand to these underprivileged people.”

Nasir Ordubatli, MD, who had long lines of patients in front of his door in Mogadishu hospital says: “We came to Somalia as a group of 13 doctors. There is a great need for medical and food supplies.” Turkish doctors in most cases also provide the medicine to the patient since they would not be able to find them on their own.