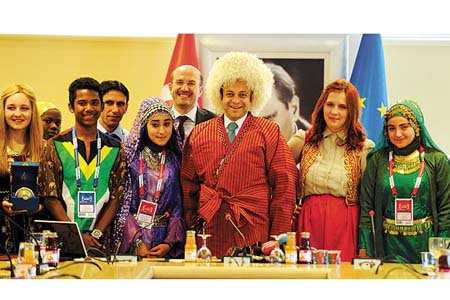 Students coming from all round the world to participate in the 11th International Turkish Olympiad, a festival that celebrates the Turkish language and which this year brought together 2,000 students from 140 countries, visited the Ankara Governor and the ministers of energy and EU affairs in Ankara on Tuesday.

A group of students went to the Energy and Natural Resources Ministry building to meet Minister Taner Yıldız. The students introduced themselves and performed samples from their Olympiad acts during the visit. Regarding their arrival, Yıldız said: “This year’s slogan is ‘Towards the Universal Peace.’ In order to establish this universal peace, we need young people who will be able to construct bonds of love and bridges between hearts. We all know Turkish teachers working at Turkish schools around the world are devotedly serving with great effort. I want to thank and send my gratitude to all these teachers. We see the students, who came to Turkey as part of the Turkish Olympiads, as serving as honorary ambassadors of Turkey in their countries. As time passes, we are becoming more and more aware of this fact. We as a government have been giving great support to this organization for good reason.”

A student from South Korea sang a Turkish song, which the minister listened to with admiration. The students presented various gifts to the minister and they posed together for cameras at the end of the visit.

Another group of students also visited EU Affairs Minister and Chief Negotiator Egemen Bağış in the capital. Welcoming the students, Bağış stated similar sentiments to Yıldız’s — that the Turkish Olympiad participants are all Turkish ambassadors in their countries. “I want to respectfully salute the well-respected Turkish Scholar Fethullah Gülen, who is the founder of this organization. I want to also send my gratitude to all the teachers at the Turkish schools for their work.” Bağış said. Some of the students sang Turkish songs during the visit, and Bağış accompanied them.

Eight Turkish Olympiad students visited the Ankara Governor’s Office on Tuesday and met with Deputy Ankara Governor Kemal Karadağ, who welcomed the students warmly. After mentioning that he attended the “glorious” inauguration ceremony at 19 Mayıs Stadium in Ankara on Saturday, Karadağ congratulated the students on their successful performances. Noting that the Turkish Olympiads are growing year by year, Karadağ stated: “We [the governor’s office] are very happy to all of this. Constructing universal peace is not a dream; it is a goal. The organization of Turkish Olympiads contributes to this goal.”

Another group of Turkish Olympiad students visited the chairman of the Prime Ministry’s Presidency for Turks Abroad and Related Communities Kemal Yurtnaç on Tuesday. At the visit, Yurtnaç mentioned that his office provides 12,000 university scholarships to international students from 140 countries who study at Turkish universities.

Speaking to the students, he said: “Our goal is to construct a bridge of love between your countries and Turkey. You should also speak about your positive impressions of Turkey to your relatives or other people in your countries. You will serve as bridges. Our goal is to improve friendship and brotherhood.”

The 11th Turkish Olympiad, which is organized by the International Turkish Education Association (TÜRKÇEDER) each year as part of the International Language and Culture Festival, will be held between June 1 and 16. A total of 99 activities will be held in 55 cities across Turkey during this 16-day period. The large inauguration ceremony was held to mark the start of the Olympiad in Ankara on Saturday and included the participation of several ministers and many other high-ranking government officials, as well as about 20,000 spectators.