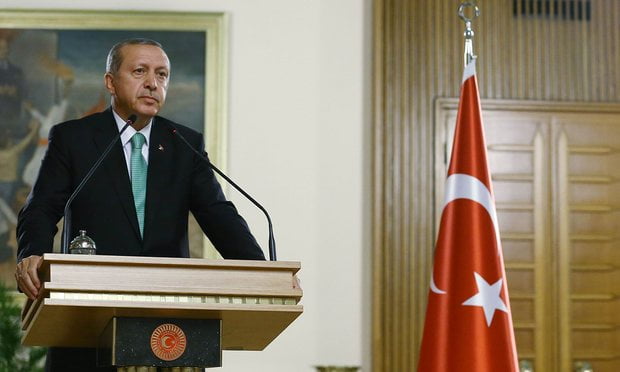 President Erdoğan has launched a purge of state personnel who he believes are linked to the exiled cleric Fethullah Gülen. Photograph: Kayhan Ozer/AFP/Getty Images

According to Recep Tayyip Erdoğan’s office, the decree will close 1,043 private schools, 1,229 foundations and associations, 35 medical institutions, 19 unions, and 15 universities. Their assets will be seized by the treasury. The presidency said that parliament will be able to vote on the measure.

It is the first presidential decree since the announcement of a three-month state of emergency on Wednesday. This enables Erdoğan’s cabinet to bypass parliament and suspend rights as they deem necessary. Decrees passed during the state of emergency have the force of law and cannot be appealed.

The government says the measure is necessary to prevent further unrest and insists it will only target those immediately associated with the coup attempt. However, there are concerns that the crackdown has been widened to root out all potential sympathisers of Gülen’s movement, turning the investigation of coup plotters into an all-out witch hunt.

The decree also extends the current maximum pre-charge detention from four to 30 days, a move that was criticised by human rights groups who have recently flagged up an increase of cases of severe ill-treatment of soldiers currently in detention.

“The decision to extend the detention period to 30 days is disproportionate,” said Andrew Gardner, Turkey researcher for Amnesty International. “It is too long and given the reports we have received so far it will facilitate torture and undermine the right to a fair trial.”

He added that the extension was a worrying sign of measures to come. “This decree is a telling indication of what the authorities have in store and might hint at more mass detentions.”

Since the bloody coup attempt last Friday, whichkilled at least 265 people and injured more than 1,000, tens of thousands of soldiers, security officers, judges, prosecutors, civil servants and academics suspected of ties to the movement founded by Gülen, who lives in the US, have been detained or suspended from their jobs.

Erdoğan has vowed to “cleanse” all Gülen supporters from the state apparatus and civil services, drawing concern from Turkey’s western allies over his increasingly authoritarian stance.

According to TR724 columnist Selin Tanbay, Erdoğan’s speech was nothing but the first signal of what she calls ‘a new plot in the making’ against the sympathizers of the Gülen movement and other dissident voices. Giving his Ramadan holiday message on September 13, Erdoğan kept his eyes away from the teleprompter and let his plans slip out for a while, Tanbay said.