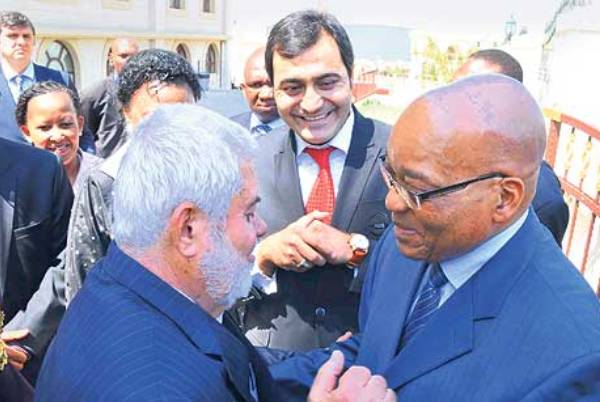 Katırcıoğlu said when he first went to Johannesburg to launch the mosque project, he met with Max Sisulu, the current parliament speaker and asked him to arrange an appointment with Mandela for him.

“I told Mr. Sisulu that I very much wanted to see Mandela, who worked hard for the salvation of South Africa and whether I could have a meeting with him. ‘Let me think about this,’ Sisulu told me. A few hours after our meeting, I received a phone call from him telling me that Mandela would be waiting for me at 12 p.m. the next day,” said Katırcıoğlu, adding that he was very surprised to get a swift response from Mandela.

The businessman said although he was told to obey some rules before his meeting with Mandela, such as not approaching him too closely or asking too many questions, he was very surprised to see the South African leader stand up with great humility to greet him.

“I could not help embracing him. He hugged me, too. We were like two brothers. … Watching this, all the security guards were surprised. Everyone was looking at us,” he said.

Katırcıoğlu said he asked for Mandela’s support for the mosque complex project during their meeting.

“I explained the project to him. He understood the project, said it would be beneficial for the region and that he would always provide support for it. He also requested that we include a medical center in the project because there were many people with health problems in the country. This was an order for us. Upon his request, we added a medical clinic to the project. Its construction has finished and it will begin to offer medical services to the people very soon,” he said.

Katırcıoğlu also said he wept upon learning the news of the death of Mandela.

“It was like I lost either my father or brother because his support, which I always felt behind me, had disappeared,” he said.

In the meantime, South Africa-based Turquoise Harmony Institute has released a condolence message for Mandela.

“History will not forget Mandela, who ended the world’s most racist regime,” the statement said.