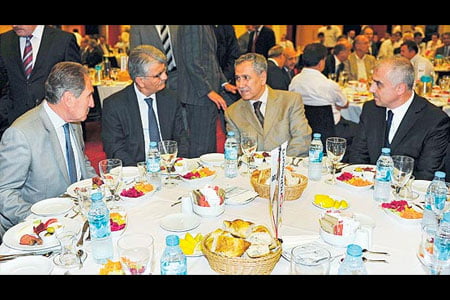 Many distinguished figures, including Cabinet members, politicians, diplomats, businessmen and journalists, came together at an iftar (fast-breaking dinner) table on Thursday night in an event held by the Ankara branch of the Journalists and Writers Foundation (GYV) at Ankara’s Congresium hall.

The Syrian crisis, which has claimed the lives of some 20,000 people, and the plight of Rohingya Muslims who have been fleeing to Bangladesh to escape violence in neighboring Myanmar, had a somber impact on the dinner. Deputy Prime Minister Bülent Arınç said that during the holy month of Ramadan he hopes that peace and security will come to places like Syria and Myanmar as well as other conflict-ridden spots around the world.

He praised the efforts at dialogue of the GYV, saying that “the world and humanity need peace. Common endeavor is needed to accomplish this,” adding, “Whatever is at the root of the problems today, we can only overcome with dialogue, common understanding and accepting each other while meeting the requirements of such acceptance.” In his short speech, Tourism and Culture Minister Ertuğrul Günay stated that Ramadan plays an important role in shoring up the unity in society, expressing his hope that the holy month will make people feel the need to help others.

Delivering the opening speech at the event, GYV President Mustafa Yeşil underlined that the foundation has been working for 18 years to develop dialogue. “We regard dialogue as a platform to understanding our richness in diversity,” he remarked. He also said he hoped work on a new constitution will be completed to guarantee this richness and diversity in Turkey.

The GYV’s honorary president, Fethullah Gülen, sent a message to the evening’s guests. “Ramadan is a time of compassion and mercy. In these blessed days, when patience and tolerance prevail, we once more remember love, peace, modesty, cooperation and living for others,” he said, adding, “Regardless of our beliefs, we are the descendants of those who maintained their own distinctive lives and had respect and compassion for others and knew to share their happiness.”

While expressing his regret at not being able to attend the event, Gülen reiterated his hope that the holy month of Ramadan would bring prosperity to the whole of humanity. He noted that those who adopt these ethical values and good manners love and embrace everybody, ignore the mistakes of others in a magnanimous manner, forgive others even when they lose their tempers, get on well with even the most bad-tempered people and smile at everyone, including those who bear a grudge against them.

The GYV was founded in 1994, and the mission and work of the foundation are inspired by Gülen, known for his teachings of hizmet (service), tolerance and dialogue.