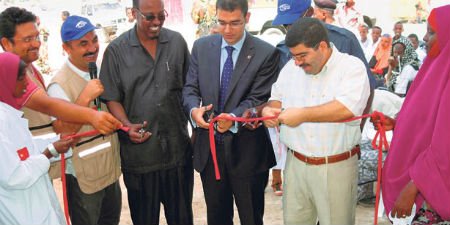 A Kimse Yok Mu official (R) cuts the tape marking the opening of a school in the Somali capital, Mogadishu. (Photo: AA)

Education Minister Ahmed Aydiid Ibrahim of the Transitional Federal Government of Somalia also spoke at the ceremony, stating his thanks for Turkey’s efforts to establish schools, hospitals and education centers in the East African nation.

Orhan Erdoğan, coordinator of the aid organization’s East African operations, delivered a speech at the opening ceremony in which he pledged continued support for the refurbished school in its mission to provide Somali children with an education in Turkish, Arabic and other subjects.

Education Minister Ahmed Aydiid Ibrahim of the Transitional Federal Government of Somalia also spoke at the ceremony, stating his thanks for Turkey’s efforts to establish schools, hospitals and education centers in the East African nation.