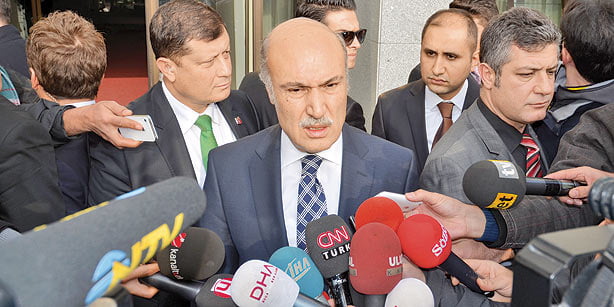 The continuing reassignment of thousands of public officials — in the police force and the judiciary in particular — is actually a government attempt to silence critics of the ruling party who are employed in state posts or force them to quit their roles if they are unwilling to comply with the government.

Independent Public Workers’ Union (BASK) President Resul Akay likened the mass reassignments of public officials to a “massacre” that is unprecedented in the history of the Turkish Republic. “The government is resorting to methods that were not used even during the military coup periods. With these reassignments, the government is forcing public servants who do not share the same political view as the government to resign,” Akay told Today’s Zaman.

The recent corruption operation that became public on Dec. 17, 2013 has led to the arrests of two Cabinet ministers’ sons as well as 22 other suspects from the bureaucracy and business worlds. Three ministers subsequently quit their posts due to claims that they had received bribes. The prime minister, however, strongly denies that his government officials or their family members have been involved in corruption.

The prime minister quickly reassigned public officials en masse in response to the operation. He initially targeted police chiefs in the counterterrorism, smuggling and financial and organized crime departments. Many of these chiefs are known to have launched and participated in successful operations against terrorist networks, corruption rings and crime syndicates for many years. They were then reassigned to less significant posts. More than 2,000 police officers have been reassigned so far.

Commentators say the reassignment of public officials is actually a policy pursued by the government to discourage those officials from continuing their current work — namely, the corruption probe. In Turkey, it is difficult to fire a public servant due to Law 657 that defines the duties and responsibilities of those servants. The law guarantees public servants a post for life unless serious crimes have been committed.

However, being reassigned to less prestigious positions is a source of disappointment for those officials, which the government hopes will cause the officials to quit their posts.

There are also claims that the AK Party government is working on legislation to allow the firing of public servants.

According to Akay, reassigned officials will also be liable to intimidation in their new positions, which will eventually lead those officials to experience psychological problems. “This [the large number of reassignments] recalls practices from the time of single-party rule. The state cannot make a decision to perform a mass reassignment of its officials,” he noted.

Sociologist Halil İbrahim Bahar, an expert at the Ankara Strategy Institute (ASE), said the mass removals and reassignments of public servants would lead to division within government institutions that would eventually lead to a decrease in the productivity of public servants. “You cannot treat members of the police force and the judiciary like machines. You cannot ignore the energy they expend when working in their areas. And you cannot see them as robots that just carry out the orders conveyed to them,” he stated.

Bahar also said the mass reassignments of police officers will create a weakness in national security that may create a heavy cost for the entire country.

The frenzied reassignments are not limited to the police force. Many high-profile bureaucrats and officials have been reshuffled at the Education Ministry, Finance Ministry and the Turkish Radio and Television Corporation (TRT).

There are claims that these bureaucrats and officials have been reassigned for their affiliation or sympathy with the Hizmet movement inspired by Turkish Islamic scholar Fethullah Gülen. Erdoğan claims that members of this movement have infiltrated state posts and established a “parallel state” to overthrow his government. The movement also orchestrated the corruption probe in order to damage his government, according to Erdoğan.

Furthermore, 20 prosecutors in critical positions were removed and reassigned to minor positions on Thursday. Some of these prosecutors had been involved in the corruption investigation. And on Friday, 10 police officials from the Malatya Police Department were sacked. It was not immediately clear whether these officials would be reassigned to other posts.

In addition five senior officials leading different departments at the Telecommunications Directorate (TİB) were also removed from their post on Friday, in the latest of massive removals in state institutions,

Turkish Public Workers’ Labor Union (Kamu-Sen) President İsmail Koncuk said the reassignment frenzy is reminiscent of a “witch hunt” or “modern Inquisition.” “If those men [reassigned officials] have done something wrong, then why not send them to the courts? Removing them from their duty en masse is a way to intimidate all public servants. Such a move carries a message to public servants that they will be punished, too, if they do not get along with the government.”

In Turkey, there are 2.6 million public servants.

In a speech he delivered earlier this week, Nationalist Movement Party (MHP) leader Devlet Bahçeli complained about the prime minister’s attempts to discourage members of the police force and the judiciary from pursuing the corruption investigations. “The prime minister is attacking prosecutors by calling them traitors and militants. He is said to have threatened a prosecutor through men he sent to that prosecutor. His attempted intimidation [of prosecutors and police officers] reveals where the real gang is. The prime minister is not acting any differently from an organized criminal group,” Bahçeli said.

In early January, prosecutor Zekeriya Öz, who had previously been at the helm of the corruption investigation but was later taken off the case, claimed he had been threatened by two high-level jurists sent by Prime Minister Erdoğan. According to Öz, the officials warned the prosecutor not to proceed further with the corruption probe. “Otherwise, you will face dire consequences,” the jurists reportedly told Öz.