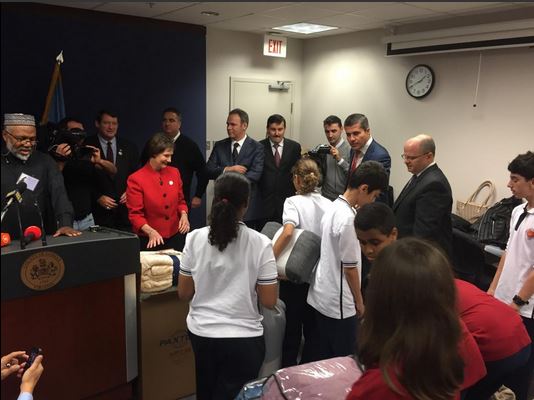 The campaign which was kicked off last year by Mayors of Virgina’s Fairfax, Loudoun and Purcellville counties visited a Syrian refugee camp in Turkey’s southern province of Adana within the sidelines of their trip that was organized by American Turkish Friendship Association (ATFA). Mayors who witnessed the life of refugees under very hard conditions expressed their intention to ATFA representatives about organizing an aid campaign in their municipalities. After that Kimse Yok Mu undertook the task and managed to collect 18 thousand blankets and USD 10,000 first year.

The great interest of US citizens to the campaign encouraged municipalities and Kimse Yok Mu to proceed it for the second year while the number of contributing municipalities in Northern Virginia raised to fourteen from four. Including culture centers, mosques, churches and synagogues, the blankets were collected in 40 points across the state. Along with local dailies, Washington Post also informed people about how to deliver the blankets to the aid centers and as a result of a month long campaign 30 thousand blankets and USD 70 thousand could be collected.

Meanwhile, the transportation sponsor of the campaign MAERSK reported that it will send the blankets to Turkey in December.