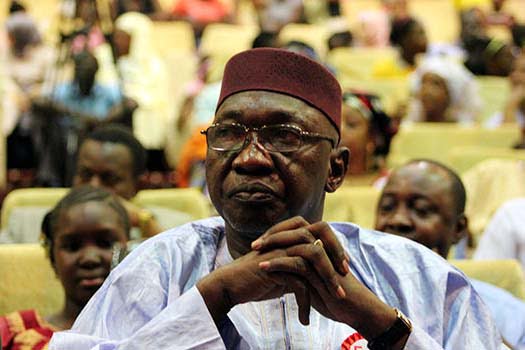 Speaking of the 11th International Turkish Language Olympiads, the Malian Minister of Culture Bruno Maiga said, “Here today, the Honorable Fethullah Gulen‘s vision is coming true”, in his speech met with the loudest applause at the cultural festival held in Izmir for the first time. Noting that students from 140 different countries have formed a unique mosaic in Izmir, “This confirms the Olympiads’ motto “towards universal peace” Maiga said.

Having toured the countries’ booths and watched the stage performances at Kulturpark, the minister underscored that they are pleased with Horizon Schools operating in their country. “As a token of our appreciation, we, with over 40 students, are in Turkey now. They have been experiencing a cultural exchange and the whole world, with students from 140 countries. They are speaking the same language, Turkish, after all, which is remarkable,” said the minister. Highlighting his confidence in Horizon Schools and regarding their significant contributions to the Malian education system, Maiga said, “Students studying at Horizon Schools will be hopefully useful for their country.” The Malian guest concluded his remarks by adding that they are happy to be in Izmir and Turkey.

Source: [in Turkish] Zaman, 25 May 2013. English translation is retrieved from HizmetMovement.Com

The carnival atmosphere by Egyptian students sweating out to qualify to represent the country at the coming 11th Turkish Language Olympiads created an unforgettable memory for the audience. The Turkish and Egyptian guests of the cultural festival held at Salahaldin International School in Cairo watched the singing, poetry and folk dance performances in admiration. Prominent names from […]