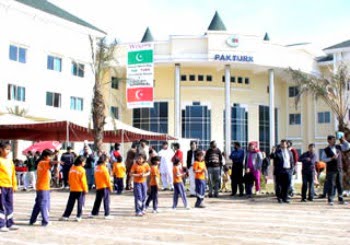 ISLAMABAD: Pak-Turk International’s Parents and Teachers Association (PTA) on Tuesday stressed against transferring the institutions’ control to other organisations as it will affect the future of its 1500 teachers’ future along with 10,000 students enrolled in 28 schools, colleges.

In a press conference, Pak-Turk Rawalpindi-Islamabad branches Spokesman Advocate Hafiz Arfat said that these institutions were working in the country since the last twenty years and the abilities of the Turkish teacher’s cannot be challenged.

The Pakistani government, he said, have cooperated with these schools and colleges after the coup in Turkey, adding that the states’ services for children and teachers were also commendable. Arfat said that the Pak-Turk institutions were registered foundations with reasonable tuition fee for students.

The decision for the closing or transferring of power of the institutions would not be acceptable to Pak-Turk management, he remarked, adding that a writ has already been filed in Islamabad High Court.

The spokesman urged that if the government found any one from these schools involved in illegal practices, it should take strict action against him. There was no specific group running these schools and no foreign funding was being received for Pak-Turk schools, he added.

The PTA – in the press conference – strongly condemned the recent coup in Turkey saying that it was a conspiracy against the democratic government. Prayer was also held for Quetta martyrs.

It is pertinent to note that, the future of private schools set up by the Pak-Turk International Schools and Colleges network plunged into uncertainty after Turkey called on the Pakistani government to close down all the institutions backed by the Gulen-inspired Hizmet movement.

The network of 28 schools and colleges in Islamabad, Lahore, Quetta, Karachi, Hyderabad, Khairpur and Jamshoro has 1,500 staff members – who teach around 10,000 students from pre-school to A-levels.