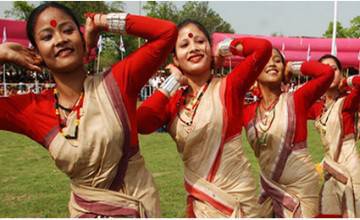 The festival, which has been in vogue for the last 14 years debuted in India this year to witness students from 17 countries come together and celebrate the diversity of language through the medium of song and dance.

The three-hour-long event began with a slew of songs that professed the idea of ‘Vasudhaiva Kutumbakam – the world is one family’ as students donning traditional attires of their respective countries swayed in unison, with the virtues of kindness, friendship, equality, peace etc flashing in the background.

Organised by city-based non-profit and nongovernmental organisation, The Educational Endowment Trust (EET) in association with the Ministry of Culture and the UN Information Centre for India and Bhutan, the event was hosted at the Talkatora stadium here.

“IFLC is a platform which aims at sowing the seeds of harmony and understanding among the people no matter which culture, creed or religion you belong to. We believe that we are all brothers and sisters in humanity. We believe that these ideas will be harvested in the future for friendship and peace,” Ersin Karaoglan, President, EET, said.

Karaoglan said that the 43 visiting students along with over 400 students from across Delhi schools, had rehearsed over a period of 8 months to present the colourful cultural evening.

“They are visiting historical sites of India and being hosted by Indian families, thereby experiencing the warmth of Indian hospitality. They will hopefully be the goodwill ambassadors of Indian culture in their respective countries,” Karaoglan said.

On Sunday they will be visiting the Taj Mahal in Agra.

Minister of Minority Affairs, Najma Heptullah, welcomed the initiative saying that there was nothing better than culture that united us and that the event reflected the message of ‘Vasudhaiv Kutumbakam’ in the true sense.

“I welcome this initiative. Today, we have gathered here with a message of unity and peace, and I believe that the message of Vasudhaiv Kutumbakam is being emanated from here in the true sense.

“We might have different religions but this diversity is only in language. Our cultures are same. We are united in one word that we are all Indians,” she said.

They evening progressed as students from each country presented their distinctive songs from their countries as Indian students shook a leg to match the tunes. A selection of ethnic dances from different countries and different regions of India were also a part of the event.

The first edition of the festival was hosted by Turkey in 2003, and the participation has increased exponentially since its inception. Nearly 2000 students attended the IFLC festival held in 145 countries last year.

The earlier editions of the festival held in Indonesia, Morocco and Australia, had also seen similar active participation of Indian students.