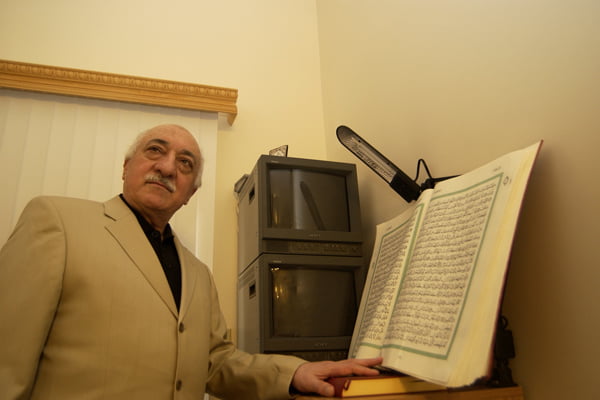 Fethullah Gulen is a renowned and distinguished scholar of Islam having broad and in-depth knowledge of world history, politics and philosophy, besides having a comprehensive vision of world religions and religious movements. The main theme of his numerous writings and discourses, is interfaith dialogue which has assumed special significance in the backdrop of ideas like the end of history and clash of civilizations.

Gulen’s movement (aka Hizmet movement) though not the first to sustain multicultural and interfaith dialogue is definitely the most laudable initiative along with a number of significant organized efforts currently at work, committed to world peace, harmony and human happiness. Gulen being highly conscious of his moral obligations is always ready to go extra miles to defuse crisis and to give peace a chance. Visualizing a bright future for the humanity, he contemplates that if we could universally believe in religious diversity as representatives of a single Truth i.e. God Almighty, the dreadful spectre of terrorism and sectarian violence would vanish. He is among those cool headed thinkers who are fully convinced that war is no solution to any of the world’s problems. It only vitiates the atmosphere and instead of dousing the flames, unleashes hostility to cause further flare up with no end to such tragic episodes.

Gulen being a great advocate of interfaith harmony and universal brotherhood has always favored restraint even in the face of the worst kind of hostility revenge and animosity. This high calibre Muslim intellectual who is witness to a number of upheavals in his own native land, Turkey, cites to his followers the example of the prophet Muhammad (PBUH) and his pious companions who never initiated war by themselves, tried their best to avoid wanton killings, worked hard to negotiate and settle scores if any, beyond the zones of battle filed. However, when they were forced to wage war, they fought a few defensive battles ensuring that transgression of any kind did not take place and the war in no case turned out to be a tool to serve some body’s personal ambitions, pride or prejudice. War is the last resort and the most detested choice for a true Muslim as the holy Quran warns that shedding a drop of blood of an innocent person is like slaying the entire humanity incurring the wrath of the Lord of the universe, inviting severest kind of punishment in the hereafter, while saving a life is like saving the whole humanity.

Gulen suggests that most of the ills of our times including misery, impoverishment, social and moral debasement and a general erosion of values are by and large, the result of mad rush to conclusions and hasty decision to resolve differences through violence, abuse and intimidation instead of patient hearing, compassion and magnanimity. Gulen being a staunch lover of humanity can never approve of such policies which are disastrous and detrimental to human happiness. He believes in the principle of forgiveness and fortitude. He even goes a step farther to affirm in this regard the views of the luminous mystic of his time Yunus Emre, who declares” don’t strike those who hit, not to respond harshly to those who curse and not to hold any secret grudge against those who abuse”

Gulen born and brought up in a traditionally religious Turkish family, who committed holy Quran to memory in a tender age, is a spiritual revolutionary par-excellence. Early influence on his life beside his saintly father, is traced to several luminaries and legendary figures such as Al Hasan al Bash, Shahwalilluah Dehlavi (1703-1762), Jalaluddin Rumi (1776) and Ahmad Sarhindi (1564-1624) etc. His deep fascination and involvement with the metaphysical experiences of Mujaddid Alf-e-Sani of India, and Badiuzzaman Syed Nursi of Turkey, clearly indicate his ardent desire and pious wish to go through a process of spiritual purgation before embarking on the divinely designated mission of transforming the society by dedicating himself to the relentless and selfless service to humanity for the rest of the life.

Why it is that Gulen, despite having been rated by the Foreign Policy Prospect as one of the highly acclaimed 100 top intellectuals of the world is still a lesser known public figure in the Muslim world. It may be because of his low profile and a moderate Turkish version of Islam and too much of his emphasis on the inter-civilization dialogue which is only a recent phenomenon in championing the cause of Islam.

Gulen being a unique example of the modern day Dervish, has successfully maintained the delicate balance between orthodoxy and spiritualism. He has repeatedly and categorically stated that the main source of his spiritual awakening, strength and guidance is the Holy Quran and the sayings of the prophet of God Mohammad (PBUH). He seriously contends that the true followers of Islam cannot abdicate the responsibility of serving the suffering humanity. In his opinion the service to humanity is as good as the sincere devotion to God. Despite being least concerned with worldly pleasure, he is not ready to renounce the world so as to leave it to the mercy of the senseless and wicked people to destroy it. He is a sufi who believes in action, proactive life, ceaseless efforts and perseverance in the face of challenges.

In most of his soul searching sermons, speeches and scholarly writings, he exhorts to his followers not to sit idle and come forward to contribute to the combined efforts for making this world beautiful and a better place to live in. The magically edifying quality of his exhortations have created a very powerful impact on his followers the world over. As a result they have dedicated themselves with utmost sincerely and selflessness to achieving the higher goals in life.

Gulen doesn’t believe in imposing his views on his followers and urges them to critically examine and logically analyze his messages before applying them on their lives. He is a strong supporter of free thinking and scientific outlook based on the universal ethical values which also need to be nurtured and promoted through systematic and scientific method of teaching in the specially designed educational institutions. A number of such ideal institutions established by his followers are being successfully run not only in Turkey but in many parts of the globe, and a large number of students irrespective of caste, color and creed are benefiting from them. These institutions are not merely for religious education. Their main aim is to impart modern education taking care of the overall personal development and carving a future in the realm of science and technology. Its a purposeful educational project with highest consideration to human values, social consciousness and a responsible behavior toward every individual in the society.

The chief characteristic of the Gulen movement is that it does not seek to subvert modern secular states, but encourages practising Muslims to use to the full the opportunities they offer.