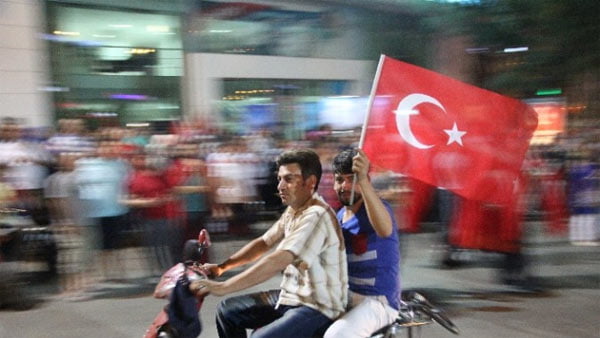 Hardly a day passes lately without a letter from those who have fled Turkey amid widespread purge that was launched following the July 15 military coup attempt.

“I decided to write this letter after I read the article titled “Goodbye letter from a Canada-bound couple,” which has been recently published on Ekşisözlük [Turkey’s one of the most popular online forum].

It turns out that I and the couple which looks like to have had a completely different lifestyles comparing to mine, have reached the same decision.

The question: Why did we need to leave Turkey?

I am well educated. I have a good profession. Actually, we would get along well in Turkey if those illegal seizure of companies, the damned coup attempt and what followed never happened. What the couple mentioned including interference in private lives, hooligans along the streets were not of vital sensitiveness. As you may guess, we, as Hizmet volunteers, used to tolerated so many negativities back in the country that these issues could come last if there would be a list.

While I was trying to survive the hatred climate that Erdoğan has gradually stirred up, I made my mind when I got unemployed at the hands of AKP. Then came my detention, leading me to set my mind on spending rest of my life with my family in other parts of the world at any cost. I started country and job search. Thank God, we moved to a Western country with the huge support of our friends where the rule of law and [respect to] human rights are internalized, prior to the July 15. I even have a job, here.

No more depressive nights, no more nervousness in which we used to confuse noises in the apartment with police raid. There are no longer here.

I no more bite my nails.

My neighbors here do not steal my newspaper from doorstep. I no more feel obliged to hung a banner at the entrance of apartment through which I may call on people to be police and not to steal my newspaper as was the case in Turkey.

I have neither seen a picture of any politician nor heard the name of them along the streets since I came here. There is no rally any more. There are no news channels that continuously broadcast nonsense and propaganda speeches of them, either.

While people hypnotized with heroic discourse in Turkey are kind of digested that the state could waste away the tax money in constructing palaces, my pocket is always filled with exchanges, here. Because, even a single cent is worth keeping. A single cent should also be returned to its owner as the rights and the just require to do so.

Speaking of rightful due, the system is here based on not violating rights of any living creature regardless of moral and material losses.

You do not suffer from inferior activities like robbery, bribery, favoritism and tax evasion in your daily life. I can’t help asking:

“Are we the Muslims, or them?

Don’t take rare racists attacks and those insults on Muslim women serious. These are few and far between and such incidents find no support among public. Especially, the violence is so much restricted that people even do not image it happening. As such incidents are rare, they are newsworthy. Turkish media exaggerate it, that is it. Believe me.

I get sad about what my people is forced to live with back in Turkey when I take a walk around the city. Our poor country where natural beauties are plucked, destroyed, made present [to pro-government businessmen]. Place endless, side-by-side jungles where a single tree is considered precious on one side and place our natural life that is buried under concrete structures and asphalt. It sad that you would not even dare to compare them.

I do not want to upset readers of these lines from Turkey, for sure. I just describe the scene that you will come across when you ask for what should be asked.

It is very hard to live in a country where some of the politicians are worshipped (yes, I don’t see any problem in using this idiom) and the rest are consisted of politicians who shy away to defend their own rights and henchmen of the palace who are always wild about higher positions.

He who used his “God-send” opportunity to fully control the military for the first time in breaking into the neighboring quagmire, will not stop. He will always want more.

Journalists with low skills government-desired stories; bureaucrats who fail to show full loyalty and businessmen who pay 20 percent (maybe it has been already increased) of his earnings to government do not feel safe.

We only pray for the future our beautiful country that look like in a collective trance when looking from outside.”

The ongoing purge leaves no room for doubt that the Turkish government is ready to go to any lengths to eliminate the Gülen movement. The current rise in homegrown Islamist radicalization is another sign that Turkey’s social fabric is undergoing a noxious change. The major effect of this change has been damage to the traditional mainstream understanding of Islam in Turkey.