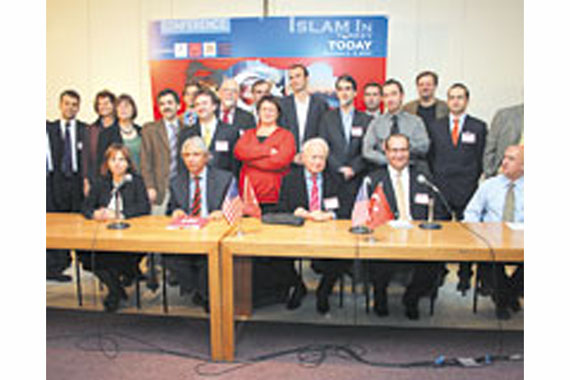 Columbia University in New York hosted a symposium titled, “Islam in Turkey Today” to discuss Fethullah Gülen and his ideas.

The academic world around the globe is holding conferences and symposia one after another to discuss the ideas and dialogue activities of Fethullah Gülen, one of the greatest Islamic scholars of our age.

Following a conference titled “Muslim World in Transition: Contributions of the Gülen Movement” held in London in the last week of October, Columbia University in New York hosted a symposium titled “Islam in Turkey Today,” where Gülen and his ideas were discussed once again.

The conference, where Justice and Development Party (AK Party) İstanbul deputy Nursuna Memecan also made a presentation, was attended by over 300 people from various countries.

On the first day of the conference, during the afternoon session titled “The Gülen Movement: An Analysis,” Bekim Agai, Ph.D., from the department of Islamic studies at Bonn University, presented a paper on “The Success Secret of the Movement: Understanding the Emergence of the Global Education Movement.” Agai spoke about the Islamic understanding of Fethullah Gülen from a wide perspective. Stating that the Turco-Islamic understanding pioneered by Gülen was a great opportunity for the world, Agai noted, “Mr. Gülen proved that unconditional tolerance could be shown not only amongst Muslims, but also toward the members of other faiths.”

Professor Paul Parker, chairperson of the department of theology and religion at Elmhurst College, dwelled on the direct positive impact of the Turkish schools around the world on global peace. “Education cannot guarantee a 100 percent peace; however, if schools like Gülen’s aren’t founded, peace can never be established. That is, trying to establish peace without giving education would only be a dream,” Parker said.

The sessions on Friday focused broadly on the role of Islam in the Ottoman Empire, along with Islamic movements that sprung up in the aftermath of its collapse, from the more traditionally based to the well-known Gülen movement, while Saturday’s sessions spotlighted the current relationship between Islam and politics, examining both the 2007 elections and the interplay between culture and religion in Turkish politics.

TAHA AKYOL, May/07/2012 What is behind the schools associated with the Fethullah Gülen movement (aka Hizmet movement)? Since the first school abroad was opened in Azerbaijan in 1991, what is the power that has caused them to be so widespread across the world in 30 (including domestic schools) years? Can the “green belt” theory of […]