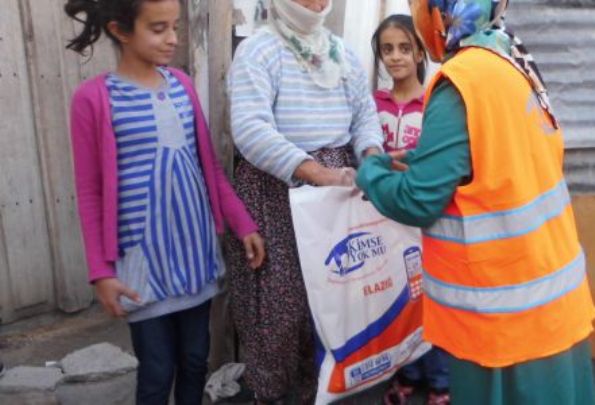 Elazig branch of “Is Anybody There?” (Kimse Yok Mu?) organization donated food and blankets to 79 Syrian families who found shelter in Turkey after the war broke in Syria.

Organization officials delivered donations, blankets and food to Syrian families with the coordination of AFAD (Disaster and Emergency Management Department) officials.  The president of “Is Anybody There?” Elazig branch, Mr. Onder Colak, noted that they have been making donations to Syrian refugees in Turkey since the first days of civil war outbreak in Syria.  He expressed that donations were being made based on the needs of the season.  For the cold winter period, Syrian guests in different neighborhoods of Elazig were provided with packages consisting of seasonal needs, like blankets and daily needs.

Colak mentioned that Turkish people always supported the oppressed, and he added “Our brothers/sisters are in pain right now. We wanted to be with them in these cold winter days. We have helped 79 Syrian families with the help of AFAD. We visited each home, one by one, and distributed the supplies and inquired after their health”.

Colak also mentioned that they hope to get support from people of Elazig and added “We should consider the refugees from Syria as our guests. In these cold winter days, the children of these families should get whatever they need, food, clothing or else. It is part of, not only our religion, but also our culture that makes us support and help the poor and the people in need. We thank everyone who are sensible about this organization on behalf of the people in need. If you want to donate text BAGIS to 5777 or call our organization from 444 4 593”.