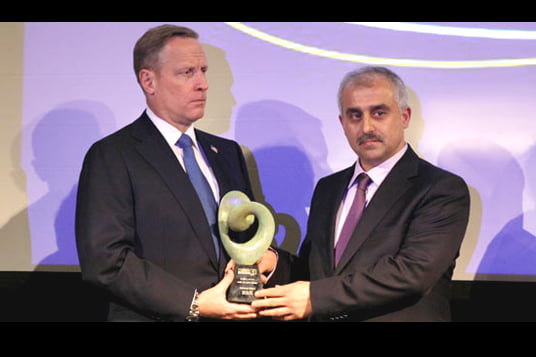 The EastWest Institute (EWI) honored well-respected Turkish intellectual and scholar Fethullah Gülen with its 2011 EWI Peace Building Award at an awards dinner held in New York on Tuesday for his contribution to world peace.

Journalists and Writers Foundation (GYV) President Mustafa Yeşil received the prestigious award on behalf of Gülen. In a message he sent to the ceremony, Gülen said he accepted the award not on behalf of himself but on behalf of numerous volunteers, among whom he sees himself.

Gülen is a Turkish Islamic scholar well known for his teachings promoting mutual understanding and tolerance between cultures. One of the world’s most influential Islamic scholars, Gülen came out at the top of the list of “The World’s Top 20 Public Intellectuals” by the magazines Foreign Policy and Prospect in 2008. Now residing in the US, Gülen has pioneered educational activities in a number of countries along with efforts to promote intercultural and interfaith activities around the world. He has written nearly 50 books in Turkish, some of them translated into several languages.

John Edwin Mroz, the president and chief executive officer of the EWI, also delivered a speech during the ceremony and said it is an honor for the institution to present the award to Gülen.

A cinevision show explaining why the award was presented to Gülen was aired during the ceremony. The video featured comments from former UN Secretary-General Kofi Annan, former US President Bill Clinton, former Secretary of State James Baker and former Secretary of State Madeleine Albright about Gülen. The video also underlined that immediately after the Sept. 11 terrorist attacks Gülen issued a message in The Washington Post condemning terrorism and offering his condolences to the victims, saying in it that a Muslim cannot be a terrorist and that one engaged in terrorism cannot be a Muslim.

Mroz said the peace award presented to Gülen is a very prestigious one as it is presented once every year. He defined Gülen as a sincere Muslim who practices what he preaches.

Nobel Peace laureate Mohamed ElBaradei and Sergio Vieira de Mello, the late United Nations high commissioner for human rights who was killed in 2003 while serving as the UN secretary-general’s envoy to Iraq, are among former recipients of the award.

I am humbled and honored by your kindness to consider me as the recipient of the prestigious EWI Peace Building Award given by the esteemed EastWest Institute.

However, I can accept this award only on behalf of the countless volunteers from different creeds, religions, nationalities and backgrounds who have come together for nothing but to serve humanity.

After all, how can I accept this award on my behalf? It is those people of noble character, who have foregone their own desires, dreams, ideals and comforts, and dedicated themselves to helping others wake up to a better morning full of hope and confidence in their future.

The collective personality and action of these heroic people is in fact who truly deserves this award. It is the young college graduates, who have volunteered to fly to countries, some of which they had probably never heard of, but where they could help the children attain a modern education. It is the sacrificing parents of these heroic teachers who saw their sons and daughters off with compassion. It is the men and women who have never ceased to generously support these educational efforts. It is the blessed people of more than 140 countries who have wholeheartedly welcomed and embraced more than 1,000 schools. Again, it is the people of all nationalities, religions, creeds and backgrounds who have held the hand of friendship, amity and dialogue who truly deserve this award.

I have always felt honored to be among and behind these respected people, but never considered myself in front of them and leading. You were kind enough to recognize their sacrifice and efforts.

Indulge me with the privilege to tell you a little bit more about them. A set of noble values is what has mobilized them all: Gaye-i hayal (the grand ideal of life), the pursuit of God’s will through serving His people (humanity). They consider this grand ideal as a key to their livelihood. Diğergamlık (altruism) is their fundamental characteristic that enables them to devote themselves to the fulfillment of such a noble goal. Mesuliyet duygusu (a sense of personal responsibility) is what moves them with compassion when they hear a child is dying somewhere in the world because of a lack of food, or a girl is deprived of her right to education because of the lack of schools. Finally, it is verme tutkusu (the passion of giving) which makes them donate generously from their time and money but expect nothing in return. For the last several decades, they have been working humbly but consistently to make it a better and more peaceful world, where everybody embraces one another with love and understanding.

However, the past decade has unfortunately been marked by the surge of interreligious and interethnic prejudice due to the ill actions of the extremists in every society. Some of them despised others for their way of life; some others took a false pride in demonizing the other’s culture and religion; and some resorted to violence, and killed innocent people in the name of their religion. Nothing could be farther from Islam than using terrorism in the name of religion. I wish and pray that this dark epoch is behind us and will never come back. I hope a more secure, prosperous and peaceful world, where people warmly embrace each other without any prejudice.

In fact, there are already signs on the horizon for a brighter future. The peoples, one after another, are aspiring to achieve this prosperity, peace and freedom in their own respective societies. They are aspiring for more open and more democratic societies, where they can attain their full potential.

Our understanding of democracy is directly related to our understanding of human nature. That is, every human being is pure in the beginning, adorned with the seeds of numerous negative characteristics from jealousy to hatred and from greed to selfishness, and also positive characteristics from compassion to courage, from empathy to love. As such, a human being is likely to become everything. Only in truly free and democratic societies, and with an education guided by universally accepted norms and values, can individuals nourish these seeds of characteristics to benefit their societies. They then hate not others but hatred itself. Greed turns into an unquenchable enthusiasm to do charity. Jealousy forces one to surpass others only in good deeds. In the absence of such freedom and education, however, all these characteristics turn individuals into selfish, greedy, jealous and hateful beings harmful not only to themselves but to their societies. With the advance of globalization, the danger such individuals pose is unfortunately not limited to their own societies.

Today, I am very glad to see that my own country, Turkey, has made great strides towards becoming one of the most free and democratic societies. Once upon a time, in fact not too long ago, it was a country where the free will of civilians was not respected; where elected officials could form governments, but were not able to govern; where the law protected only the mighty, but not the weak; where people were banished from enjoying their cultural identities; and where the press was free only to serve this established lawlessness, but not to expose it. Certainly, the journey of democratization is a rough one. But the people of my country have demonstrated time and again that they are determined to make that rough journey.

It is a journey led by the people of my beloved country, the people from all walks of life. These heroic people have demonstrated the sincerity, courage and perseverance to attain a strong democracy protected by the rule of law. I pray for their success. Yet, I am deeply saddened by the unfortunate and continuous allegations that try to undermine and demonize their sincere democratization efforts.

Tonight, we have gathered here to thank the countless volunteers of the Hizmet (service) Movement for their selfless work to bring peace and harmony to our world.

Honored to be among them, I am humbled to receive the EWI Peace Building Award on their behalf.