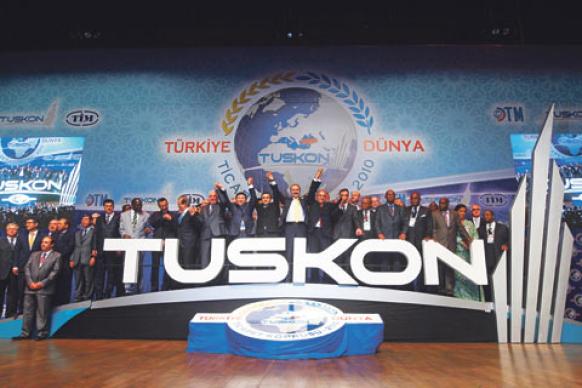 Hundreds of businesspeople from countries in central West Africa traveled to Turkey to attend a trade event coordinated by the Turkish Confederation of Businessmen and Industrialists (TUSKON) in İzmir on Monday.

The construction, furniture, food, agriculture, textile, cosmetics and machinery sectors were represented at the event.

Speaking at the opening session of the event, TUSKON Deputy Chairman Ahmet Ciğer stressed that 40 percent of the world’s unused arable land can be found on the African continent, and called on Turkish businessmen to exchange ideas with African partners on how to bring modern agricultural techniques to those lands.

“An increasing number of infrastructure projects facilitate transportation and communication and lead to a rise in bilateral trade volumes between African countries. The positive developments I mentioned show that the Turkish business world should take a greater interest in Africa,” Ciğer added.

Ciğer said that Turkish schools in Africa help states establish permanent friendships based on human values and encourage Turkish businessmen to settle down in those countries.

Speaking at the meeting, Burkina Faso Ambassador to Turkey Amadou Dicko called on Turkish businesspeople to invest in his country. “We want our region to be integrated into world markets. I invite Turkish entrepreneurs to invest in the gold mining, sesame production and solar energy sectors in Burkina Faso,” the ambassador said.

Trade agreements and investments worth $30 billion have resulted from the Turkey-World Trade Bridge, a semi-annual trade and investment summit organized by TUSKON since 2006. These summits help establish trade links between small- and medium-sized Turkish enterprises and markets around the world.

TUSKON has organized 23 World Trade Bridge summits between 2006 and 2014, and around 70,000 businessmen from Turkey and around the world have had the chance to come together and make connections thanks to the events.

A nongovernmental and nonprofit umbrella organization for seven business federations, 211 business associations and more than 55,000 entrepreneurs from all over the country, TUSKON is the most effective business group representing Turkey abroad.

The confederation aspires to offer solutions for Turkey’s political, social and economic problems as well. “In working toward our goals, TUSKON’s activities have ended up helping our members take huge strides toward becoming global players in today’s rapidly changing economic environment. The unique aspect of the Trade Bridge concept is its ability to bring together domestic and international businesses and help them to develop one-to-one relationships,” the official website of the organization notes.

Egypt’s Al-Azhar University, one of the most respected Islamic Sciences centers in the world, and the Islamic Research Association, has examined the works of Gulen found no contradiction to the school of Sunni Islam. Beyond these works, in some universities, especially Al Azhar, many master’s and doctoral theses on the subject of Hizmet and Mr. Gulen have been published.

As a part of a prolonged campaign of intimidation against opposition figures and institutions, the government has been engaging in oppression of the TUSKON — which had had a strong presence in African countries — and contributing to the deterioration of already weakened Africa-bound Turkish exports.