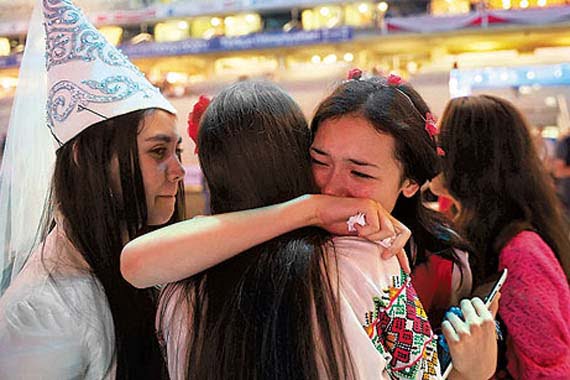 Students who came to Turkey about four weeks ago to compete in the 11th International Turkish Olympiad — a competition in which Turkish speakers from around the globe recite poetry, write essays and sing songs — bid one another teary farewells during the Olympiad’s closing ceremony in İstanbul on Sunday night.

Nearly every country in the world sent students, who had the opportunity to spend time together and form strong friendships during the Olympiad, making it very difficult for them to say goodbye. Many cried as they bid farewell to their new friends. “Don’t be sad, we will meet again,” some said in an attempt at consolation, while others exchanged gifts. Students took down email addresses and phone numbers and promised to keep in touch after returning to their home countries.

Ukrainian student Reyana Kadirova told Today’s Zaman that she’d met people from all 140 countries participating in the Olympiad, adding: “Thanks to the Turkish Olympiads, I formed friendships that I might not be able to build again in my life. Whichever Turkish city we visited, we were welcomed with great hospitality. I never felt like foreigner during the time I spent in Turkey.”

Enes Ahmadi from Australia told Today’s Zaman that he felt he had visited 140 countries at the Olympiads.

Abdullah Waziri from Kenya, Alfian Nurdiansyah from Indonesia and Abdulrab Hoheb from India stayed in the same dorm room for the Olympiad, and formed lasting friendships.

Nurdiansyah said that the three became like brothers in Turkey, although all of them come from different countries and cultures. He added: “Now, we are returning to our countries. I want our brotherhood and friendship to continue.”

Akouvi Deborah Eguida from Togo said: “I don’t want to return to my country. I could live forever here with such sincere and warm-blooded people. I had friends only in my country a month ago, but now I have friends from countries I couldn’t find on a map.”

Ahmet Dere, a Turkish teacher working at a Turkish school in Kenya, told Today’s Zaman that though the students got acquainted just a month ago when they first came to Turkey to attend the Olympiads, the strength of their friendships made it seem like they’d known each other for 40 years.

The closing ceremony of the Olympiads was held on Sunday night at İstanbul’s Atatürk Olympic Stadium. Nearly 250,000 spectators joined in the festivities. Students fascinated local audiences with 99 stage shows in 55 cities across Turkey in the Olympiad.

Turkish pop diva Ajda Pekkan, who was on the jury for the Olympiad’s singing finals (held at İstanbul Sinan Erdem Sports Hall on June 7), called the Olympiad a very successful organization. “I watched the closing ceremony on TV. The laser light shows, music and fireworks in the ceremony fascinated me. If there aren’t any problems, I plan to attend the closing ceremony when it’s held next year,” Pekkan said in an interview with Today’s Zaman.

Republican People’s Party (CHP) Deputy Chairman Erdoğan Toprak told Today’s Zaman that students who attended the Turkish Olympiad will move on to be advocates for Turkey in their countries, adding: “They will tell of our culture and hospitality in their countries. … I want to thank Turkish teachers [working at Turkish schools all over the world]. They have a very important duty.”

Justice and Development Party deputy Nimet Baş said: “I am proud of the organization on behalf of my country and my language.”

Songwriter Sezen Cumhur Önal, who also spoke to Today’s Zaman, said the Olympiads were “a dream of June” and proposed that they be held not only in Turkey but in other countries as well. Önal also thanked well-respected Turkish scholar Fethullah Gülen for supporting the Olympiads.

Arabesque singer and composer Orhan Gencebay praised the closing of the Olympiad, saying it was one of only two ceremonies he had ever admired in his life.

The poetry final took place at the Ankara Arena Sports Hall in June. Thousands of people, including senior officials, politicians and high-profile guests from the media and art world, were in attendance. Maty Diokhane from Senegal, who recited “Zindandan Mehmed’e Mektup” (A Letter from Prison to Mehmet), a poem by famous Turkish poet Necip Fazıl Kısakürek, won the highest scores from jury members and was named the winner.

The singing final of the Olympiad was held at İstanbul’s Sinan Erdem Sports Hall on June 7. Bulgarian Martin Yordanov, who sang “Deli Gönlüm” (My Mad Heart), came first in the final.