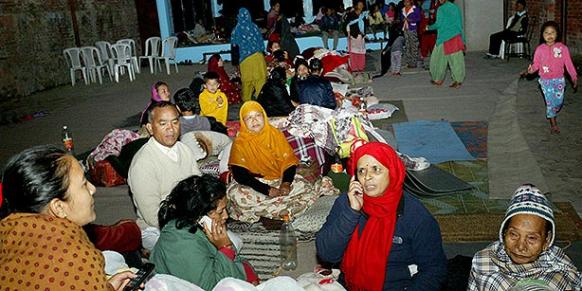 The Turkish Meridian schools in Nepal have offered shelter to the victims of last Saturday's devastating earthquake. (Photo: Cihan, Atıf Ala)

The Meridian Turkish schools, which have been active in Nepal since 2002, have offered support to the earthquake victims ever since from the first day of the disaster, as the death toll has surpassed 5,000. The schools were founded by entrepreneurs inspired by the teachings of Turkish Islamic scholar Fethullah Gülen.

The volunteers from the Turkish schools have searched Kathmandu’s streets with motorcycles to find people affected by the earthquake.

A large number of Kathmandu residents currently sleep in the conference hall of the Turkish school in the Nepalese capital. Sita Ghimire, one of these Nepalese people, told Cihan that he and his family became concerned after many houses were damaged and opted to stay at the Turkish school because it was safer.

Another guest at the school, Suman Das, said he and his family needed a large and safe place to stay. Das said he is grateful to the managers of the school for opening their doors to them.

Sarita Tamang, who said she was at home when the earthquake struck, is among the Nepalese people who saw the Turkish school as a place she could trust to go and be safe.

Fatih Doğan, one of the school’s managers, explained to Cihan that he and other managers feel duty-bound to help the people of Nepal as they are having troubled times. Doğan, who has been teaching Turkish in Nepal for four years now, stated that they are willing to help the earthquake victims as much as they can. According to Doğan, many Nepalese told them that they are surprised to see the Turkish teachers did not leave the country following the earthquake and offered their gratitude to the teachers for staying to help.

Fırat Meço, one of the Turkish teachers, said he is already over his initial fear and along with his colleagues, his only concern now is how to help people in the quake-hit country.

The school’s deputy director Halil Çınar, speaking to Cihan, said the most destruction caused by the earthquake occurred in cities other than Kathmandu. Stressing that the earthquake was extremely devastating, Çınar said: “We are still in shock. We are struggling to get over it.” According to Çınar, more than 30 Turkish tourists were accepted as guests at the school along with the Nepalese. “We tried to cope with this pain together, we shared the food in our kitchen together,” Çınar said.

Murat Özdemir, one of the Turkish tourists who took shelter at the Turkish school, told Cihan: “We are most thankful to them. They have opened their door to us. They cared so much, maybe even more than our relatives could care. Unknowingly, we had come to the heartland of death. But I cannot imagine what condition we would have been in, if it wasn’t for these fellows here. It feels like our home here. These are really nice people. We were biased against these people [affiliated with the Gülen movement]. I have figured out once again that being biased is so wrong. I have now seen that these people are nothing like we had been told. We are so thankful to them. They welcomed us like family and shared everything they have with us.”

Another Turkish tourist, Emrah Doğan, said he was welcomed at the Turkish school beyond their expectations. “This was not like a stranger helping another stranger. Here, there is an incredible authenticity,” he said.

Elaborating on his story, Doğan said he had come across a fellow Turkish group while he was wandering through the temples of Kathmandu by chance before the disaster. “After the earthquake, one considers ways to survive once they get over the initial shock. That is when I got a text message from this group saying: ‘There is a Turkish school here. They have welcomed us. You should come here no matter what.’ We were surprised at first to hear about the presence of a Turkish school in Nepal. But then we found the way to come here somehow. We saw great hospitality here, beyond what we expected. Only a brother can take care of you like this. They did not treat us like victims but like family.”

Doğan added: “These people have become our brothers. They touched my life. We are going to tell the world and everyone we know about how caring and hospitable people they are.”

Seven of the Turkish guests and a Russian guest at the Turkish school have now joined the aid efforts.

Kimse Yok Mu executive Levent Eyüboğlu told Cihan that 25 tons of aid has been distributed in the region by the charity. The Turkish Prime Ministry’s Disaster and Emergency Management Directorate (AFAD), GEA (Mother Earth) and the Turkish Search and Rescue Team (AKUT) have also carried out aid efforts in the Nepal earthquake.