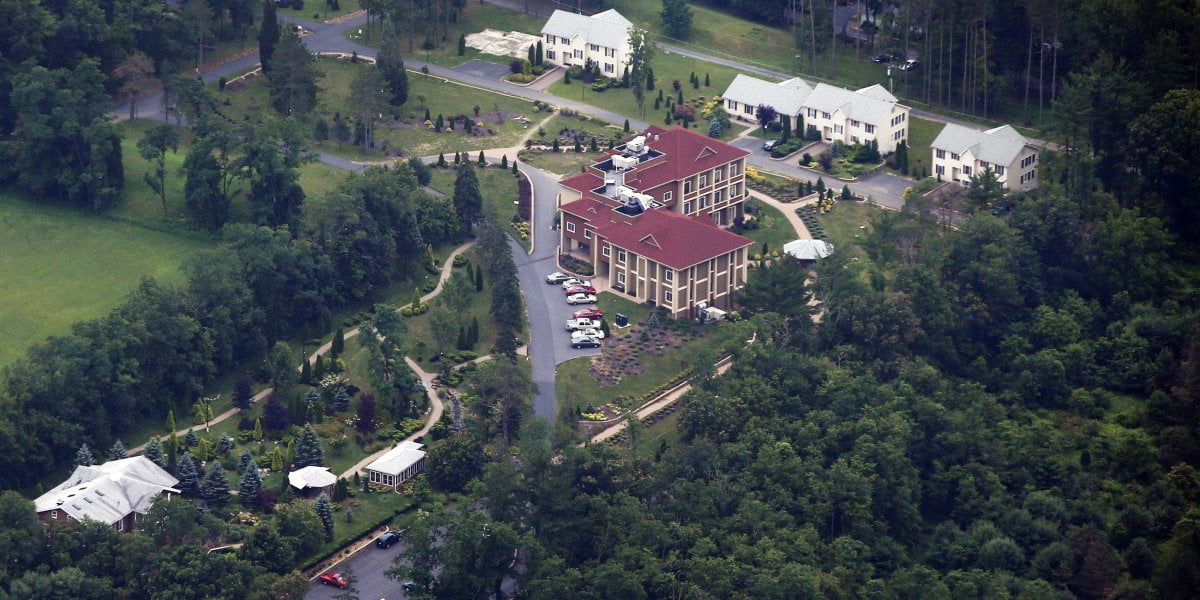 An aerial view of the Golden Generation Worship and Retreat Center in rural Saylorsburg, Pennsylvania, is seen in this picture taken July 9, 2013.

Those in the compound were just concluding the Friday midday prayer on a hot Pennsylvania afternoon when one of Fethullah Gulen’s followers trotted quietly into the room and whispered urgently that something bad was going down in Turkey.

Gulen, the 77-year-old Turkish cleric who has lived in Pennsylvania for nearly 20 years—and who has, since that Friday, become a locus of international controversy–headed for his private salon with several of his students, where they gathered on plush beige sofas beneath framed works of Arabic calligraphy.

“At first we didn’t think it was that serious, but in the middle of it, someone said there were soldiers involved and people had been killed,” said Osman Simsek, one of Gulen’s closest aides.

It was July 15. And what was happening, they soon learned, was a military coup. Gulen, who suffers from diabetes and heart disease, was distraught, Simsek said.

Realizing “we couldn’t really do anything,” Simsek said, the group began to pray, loudly and together. Several wept. They didn’t stop praying until early the next morning.

When Simsek, who also functions as Gulen’s chief publisher and archivist—and has personally authored three books on Gulen—told me this story several days later, we were seated on sofas in Simsek’s living room in a house a short drive down the street from Gulen’s Golden Generation Retreat and Worship Center.

Simsek’s wife served Turkish coffee and sweets, and Simsek showed me the binders that he had collected of Gulen’s writings over the years, as well as the books of Gulen’s sermons that he had helped publish.

Gulen, who preaches a Sufi-inspired vision of Islam that emphasizes education and peaceful coexistence, has a global following in the millions, helped in large part by the video sermons that Simsek helps circulate to the world.

Turkish President Recep Tayyip Erdogan has blamed Gulen and his movement, known as Hizmet—Turkish for “service”—for the coup attempt, allegations that Gulen denies. In the weeks since, Erdogan’s government has arrested more than ten thousand of Gulen’s alleged followers and has called for Gulen’s extradition.

At the secluded compound in the Poconos, the developments have caused a lot of stress–although Gulen’s followers say the anxiety results more from concern for their fellow Turks back home than it does from a concern that Gulen will ever be extradited.

For nearly twenty years, Gulen has lived on the 25-acre grounds of a former Turkish-American summer camp. There are several large houses, a fragrant garden, a pond, soccer field and volleyball court.

The main house, or community center, contains the compound’s mosque, a Turkish-style salon furnished with sofas, framed Sufi poetry and a massage chair, and Gulen’s spare private apartment, which contains a bed, desk and treadmill.

Gulen has never married, has no children, and prefers a modest lifestyle, according to his followers; Simsek showed me pieces of recycled cardboard and tissue paper, upon which Gulen had written sermons and poems because “he doesn’t like to waste any material.”

His followers call Gulen ‘Hocaefendi,’ which in Turkish translates roughly as “master teacher,” and he is famous for praying in the middle of the night–an extra sign of devotion on top of Islam’s usual tenets–and for his prayers sometimes having the appearance of being answered, Simsek said. “Last year, it was snow season and it was supposed to snow, but it hadn’t yet, so Hocaefendi asked everyone to pray for snow,” he said. “The next day it snowed.”

A known recluse, Gulen has only given two media interviews since the attempted coup; one to a group of reporters who showed up at the compound’s gates immediately afterward, and one to CNN’s Fareed Zakaria on Sunday.

A Wall Street Journal reporter and I were allowed to take a chaperoned visit to Gulen’s salon, where an aide presented the man himself, seated silently on a sofa, looking tired. Above him, there was a framed picture of the words “muhabet dugam”–Turkish for “continuation of love”–written in Arabic script.

The aide, Alp Aslandogan, who heads the Alliance of Shared Values, a New York-based umbrella organization for various Gulen-aligned American non-profits, mumbled to Gulen in Turkish, and along with another aide, helped lift the the 77-year-old into a standing posture. Aslandogan told the other reporter and I that we could take Gulen’s picture.

According to Aslandogan, a few hundred visitors—nearly all of them Turkish or Turkish American—trickle into this compound every year to hear Gulen’s sermons, and to pray and study with him. Some stay for a few days; others, often Ph.D candidates or future theologians, according to Simsek, stay for months or years as quasi-graduate students.

Their stays are entirely paid for by “friends and businessmen,” Simsek said, and like Gulen, these students rarely leave the compound.

The various organizations and people affiliated with Gulen in the U.S., Turkey and elsewhere are believed to be worth millions, if not billions, of dollars. But in the Poconos, the wealth is subtle, presenting itself more in anecdotes than in appearance.

“Hocaefendi has come to this house many times, so many of the things are gifts from him,” Simsek told me as we sat in his living room. “He had the cupboards done,” he said, gesturing to a wall of light wooden cupboards.

Marsha Beers, an area resident whose ex-husband, Howard Beers Jr., is a local official and contractor who helped build and refurbish the compound, said her home, too, is full of gifts from Gulen and his followers.

One year, she said, the Gulenists took Beers and her then husband to Turkey “to meet their counterparts over there.”

“We yachted on the Bosporus. We stayed in a six-star hotel. We had an all-day spa treatment. They treated us like royalty,” she said.

On the second day of my visit, one of Gulen’s students, a 28-year-old Turkish-speaking Afghan-Australian named Sadeq, took me on a tour of the grounds.

Sadeq, who had only been at the retreat for a month, described himself as “the new kid on the block,” and said he had so far only had one personal interaction with Gulen. It came after Sadeq jammed his finger playing basketball. Gulen stopped him in the hall and inquired about the finger. “He inspected the cast,” Sadeq said, and wished him well.

We passed several of the large houses that function as dormitories for visitors and students, one with a child’s bike sitting outside.

We wandered through the well-tended garden, and into the dining hall where a couple of wall-mounted screens display a rotation of Sufi prayers, and where the Turkish chef–an apparent animal lover who is rumored to leave food out for the bears–offered to prepare a late lunch. (I declined.)

We visited the pond, encircled by a walkway with benches, and the soccer field, volley ball pitch and basketball court.

From the outside, the Golden Generation Retreat and Worship Center would be unremarkable, if it weren’t for the guard house in the compound’s driveway–or for the occasional protesters who show up, waving Turkish flags in support of Gulen’s rival, Erdogan.

It’s the latter aspect that really gets to the neighbors.

“We’re tired of having our tranquil little town being interrupted,” said one woman, whose property abuts the compound.

“There’s something been fishy up there for years,” added her husband, who said he wanted to be identified only as “a concerned patriot.”

The two were sitting at a local bar, popular with the area’s working class bikers, where a large group lamented the compound’s general sketchiness to me–one woman claimed she knew someone who once saw Osama Bin Laden at the compound–and complained that people from the compound were always stuffing invitations to Fourth of July or Thanksgiving celebrations in their mailboxes. None of them had ever accepted.

In a larger region of modest farms, trailer homes and small town bars where the predominantly white patrons all know each other, the compound is generally viewed as quiet, but strange.

Marsha Beers thinks the negative views stem from ignorance. Most people just haven’t met the Gulenists, she said. “They’re different. And people are scared of what they don’t know.”

Abigail Hauslohner is a national reporter who covers Islam, Arab affairs and America. Before coming to Washington in 2015, she spent seven years covering war, politics and religion in the Middle East, and served as the Post’s Cairo bureau chief. She has also covered District politics and government. Follow @ahauslohner