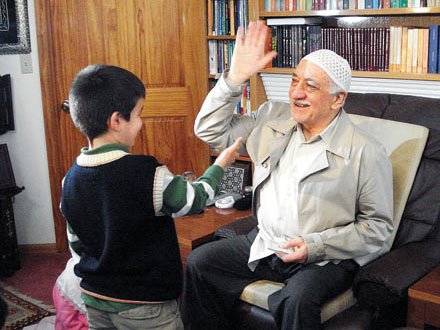 Those who want to reform the world must first reform themselves; purify their inner worlds of hatred, rancor, and jealousy; and adorn their outer worlds with virtue.” M. Fethullah Gülen

“The greatest gift today’s generation can give is to teach their children how to forgive and be tolerant.” M. Fethullah Gülen

Reuter World News reports that the Trump administration is mulling over the question whether to extradite to Turkey the Muslim cleric, M. Fethullah Gülen for masterminding the failed coup in Turkey on July 15, 2016.

Recently, during a news conference in Doha, Qatar, Turkish Minister of Foreign Affairs Mevlut Cavusoglu remarked that at the G20 summit President Trump told Recep Erdogan that the U.S. was working on extraditing Gülen and 80 of his followers to Turkey for treason and tax evasion.

Apparently, President Erdogan feels threatened by Mr. Gülen, who is the complete opposite of Erdogan. Mr. Gülen is a world-renowned educator, mystic and peacebuilder, who eschews politics. He’s a poet and writer of numerous books and articles that speak about world peace, spirituality, and the importance of interfaith dialogue.

Mr. Gülen, who has several million followers world-wide, now 80 years old, has suffered with a heart condition and diabetes for the past 30 years. He spent his professional life as a charismatic preacher in the Ministry of Religious Affairs. He has not been engaged in political action, nor has he displayed opposition to the Turkish Republic.

Mr. Gülen has been the inspiration behind the Hizmet or service movement. His followers established several universities in Turkey and hundreds of elementary and high schools throughout the world, including some in the U.S. These schools emphasize science and math and do not offer classes in religion.

I visited some of these schools when I went on a tour of Turkey in 2005 with several individuals from Atlanta, including a rabbi, the president of a Lutheran denomination, an expert on Sufism and a political scientist from Georgia. We were impressed with these schools, some of which were in rural parts of Turkey.

In one school we were the first Americans the students ever met. They were very gracious to us and gave us new meaning to the word, hospitality.

Our itinerary took us to Istanbul, Konya, Aspendos, and Antalya on the Mediterranean Sea. Each night we were invited to dinner in the home of our Turkish hosts. After one dinner, a young 8-year-old child approached me, knelt down, and asked to kiss my hand, as a sign of respect. I was very touched by this.

Later that evening, I realized that the hospitality we experienced in Turkey was simply the outward manifestation of an inner attitude of welcome that arises from a profound conviction of faith. I also thought that the hospitality we received from our hosts made us realize that the person who inspired the Hizmet movement, Mr. Gülen must be a saintly man.

Some years later, at a conference on Gülen held in Baton Rouge at Louisiana State University, I spoke to a Jesuit priest who had visited Mr. Gülen at his home in the Pocono Mountains in Pennsylvania.

This priest told me that he had met with three popes in his lifetime. However, he was more impressed with Mr. Gülen than any of these three popes, two of whom, Pope Benedict XIV and Pope John Paul II have been canonized as saints. This priest characterized Mr. Gülen to me as a mystic.

The F.B.I. has thoroughly investigated the charges made against Mr. Gülen by Erdogan and found Mr. Gülen completely blameless. Hence, it would be a total travesty of justice if President Trump decides to accede to President Erdogan’s wishes and extradite Mr. Gülen to Turkey only to face a death squad.

Moreover, according to the U.S. Immigration Services (www.uscis.gov/green-card-holder) a permanent resident or green card holder, such as Mr. Gülen, has the right to live permanently in the United States.

Finally, I would point out that the Editorial Board of the New York Post on Dec. 17 noted that,“For all Erdogan’s bluster over the Saudi murder of regime critic, Jamal Khashoggi, he wants nothing more than to do the same thing without the bad press.”